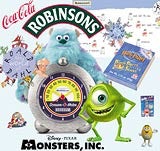 As any parent knows, children can be fussy eaters. Associate their favourite cartoon character with their least-liked vegetable, however, and harmony can be restored to mealtimes. Using something that children like to overcome their resistance to something they don’t like is only part of the reason why many food and drink manufacturers are entering into licensing agreements with the rights-holders of cartoon characters or celebrities. The main reason is that such initiatives can encourage sampling and create powerful brand loyalties in a competitive market.

Diane Stone, director of global business-to-business media company Advanstar Communications – the company behind June’s New York Licensing 2002 International conference, which serves an industry worth &£177bn worldwide – explains the growth of this particular sector: “Food is a great category for licensing out; for instance, the Coca-Cola brand is used on everything from clothing to gifts and collectibles. It is also great for licensing in – for example where toys are manufactured that look like M&amp;Ms – and for ingredient licensing, as in the case of Oreo Cookie ice cream. The relationship people have with food is perhaps the most intimate relationship that can be had with products.”

Or, as Richard Woolf, director of UK licensing at global provider of children’s entertainment and merchandise licensing company 4Kids Entertainment International, says: “Children associate with their favourite characters and are more likely to encourage their parents to buy products which feature well-known characters. A parent would buy food that is healthy, such as yoghurts or vegetables, if it is associated with characters – their child is more likely to eat it that way.”

Carolyn Moore, group account director from promotional marketing agency Dynamo, suggests that licensing products can allow consumers to “live the brand experience”. She adds: “A partnership with a recognised character can offer reassurance to the consumer and reassure them about any potential risks associated with buying that product.” Examples of this include the Willie Wonka confectionery range, Bertie Bott’s Beans, or the Roald Dahl’s Revolting Recipes offer, in partnership with Robertson’s.

According to 141 group account director Fiona Prigmore, who worked on a tie-in between Robinsons and Disney’s Atlantis film, a licensing agreement can increase sales as it “creates stand-out on the shelf and differentiates a brand from is competitors. It also builds excitement among staff and salespeople, when they are working with the latest hot property.”

In the case of entertainment tie-ins, licensing agreements can also enable brands to “piggyback” on publicity which far exceeds the amount the brands’ own budgets allow. Copyright Promotions managing director Steve Manners points out: “The manufacturer has the added benefit of being associated with a property that is well-known, with ready-made publicity such as TV coverage or a film release. A movie such as Spider-Man has a huge marketing budget, which includes aboveand below-the-line advertising.”

So how does a brand go about choosing a licensing partner? As with any aspect of marketing strategy, licensing agreements require careful thought, from strategic planning to tactical delivery. Moore says: “It is important that a character is chosen which reinforces a brand’s values. For instance, when Robertson’s removed the golly from its packs it was important that the replacement was able to embody the virtues offered by the Robertson’s brand – value, quality and heritage. The World of Roald Dahl was chosen because it reinforced these values.”

Manners suggests: “Before a company approaches a licensing agency, its marketers need to understand exactly what their target market is, and whether they would like to do an on-pack promotion or a licensed product with character branding. Visits to trade fairs can help in understanding what is going to be the next big trend, and in getting an idea of what is around. The licensing agency can help the manufacturer to find a property that has synergy with the latter’s product.”

Prigmore believes that manufacturers need to be careful when considering how a licensing arrangement will work with the brand. She advises: “Brands need to create a strong and consistent look across all media, allow consumers to interact with the campaign and ensure the partnership is remembered beyond the duration of the campaign.”

Licensing agreements can involve far more than just putting a cartoon figure on packaging. Woolf says: “Many foods, such as cakes, confectionery and pasta, lend themselves to licensing. They can even take on the shape of a particular character. Items such as confectionery can now incorporate a toy element, and this allows the child to have an item to play with after the food has been consumed.”

There are, however, pitfalls for the unwary. John Barker, commercial contracts and IT lawyer at law firm Last Cawthra Feather, explains: “The rights-owner will want to license the right to use the character in a limited way – for a particular purpose, in a particular medium and a particular territory.”

Barker explains that limits imposed by rights-owners can even dictate the positioning of characters on packaging or the colours used, and that owners may impose severe limitations on how the character can be used – for instance, specifying that characters can be used on packaging but not in advertising. He adds: “It is commonplace for the rights-owner to request a royalty for each product sold that displays the character. This is certainly a point for negotiation between the parties, but where the character is particularly high-profile – such as those in the Monsters Inc. film – the owner is likely to argue that the character is contributing significantly to any increase in sales which follows the deal. There is often an inequality of bargaining power, so the manufacturer should be aware of the owner’s strong position.”

Taken for a ride?

Barker suggests that this inequality can mean manufacturers end up entering onerous or unfair agreements, such as “obligations to sell a minimum quantity of product”, with severe financial consequences for any breach. Manufacturers need to take expert advice and read the small print extremely carefully.

As the licensing market continues to grow, there is a danger that it could become a victim of its own success. Prigmore warns: “The lifespan of a hot property is not as long as it used to be. Children are bombarded with new distractions every day, so competition is high. In order to maximise brand relationships, properties will need to become more accessible and look at more ways to ensure retailer buy-in.”

Looking to the future, Moore suggests: “Brands will have to decide whether to be one of many products using a particular licence, and risk not standing out from the crowd; or to go for an alternative property, where they will have a bigger share of voice, but may not benefit from the surrounding hype.”

Manners believes “Consumers are becoming more sophisticated. They will not accept any product just because it has a logo on it. The product has to be developed to reflect the core values of the brand and also be seen as value for money for the consumer.”