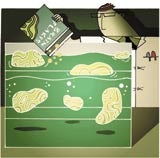 As quiz shows and puzzles proliferate, consumers are beginning to expect promotions to engage their intellects. Mark Palmer looks at the ways some brands are trying to make consumers think

Promotional campaigns seem increasingly likely to make us think: about the brand itself in a cleverer way, or through a scheme that’s surprising, surreal or off the wall. As campaigns become smarter, it is no longer possible to smooth over uncreative, tired cracks in the promotional pavement with a catchy jingle or cuddly-toy giveaway.

Or even to give away a free CD with every new bank account opened – a sentiment capitalised on by NatWest in a recent campaign based on the idea that student customers are a little smarter than the average bear and want something more practical from a promotion, such as cheaper rail travel. Customers opening a NatWest Student Account are given a free five-year Young Person’s Railcard, not “another free CD you don’t actually want”.

If now is the time to get thinking, there is one type of thought men are famously able to entertain every three seconds: smut. And women can consider the topic every five seconds, giving the men a two-second breather. But while it has always been in fashion, the trend now is for “clever smut”.

A promotion for this year’s National Vegetarian Week was sponsored by Quorn food products. Campaign imagery featured comedian Dave Spikey holding a loft a large courgette, with the tagline: “Can you keep it up for a week?”. Other attractions included Quorn recipes promising to “stiffen your resolve” and a website where a short film of vegetable fondling could be found for the more liberated customer. A free lifestyle guide from the Vegetarian Society, entitled Food for Thought, was also promoted among all the naughtiness.

Promotional smut is no longer about the blatant use of sex to sell – not for this medium the Big Brother contestant thinking what she could do with an empty wine bottle. These days, it is strictly serious – the healthier option that gets people thinking about their lifestyle as well as the size of their courgette.

In a recent Pot Noodle promotion, smut came strictly surreal when the brand gave customers the horn – literally. There were 1 million plastic horns to be won instantly as part of the promotion, proving the point that making people think doesn’t have to mean Proust on every packet. Sometimes a general sense of “eh?” can be an equally effective way of getting us thinking.

An alternative way to engage the public’s intellectual interest is to challenge received wisdom. Swordfish recently launched a promotion for Boomerang Media that certainly got the Australians thinking – even more than about England’s form on the cricket pitch. The tagline for the campaign was: “The Boomerang is British” – a controversial claim that Swordfish director Steve Richards says was “based on evidence found on a stone carving from 4000BC, uncovered on Ilkley Moor in Yorkshire”. A seemingly mad idea, then, that turns out to have a chance of being true. The British media picked up on the silly-season story, which served to flag up the main event – an online treasure hunt in which postcards were left in bars and cinemas offering the prize of a £50,000 diamond-encrusted, golden boomerang, made by the Queen’s jeweller.

Post-Live8 and the London bombings, the more thoughtful public mood is bound to affect how frivolous some brand promotions can be. In a more subdued, serious climate – the craze for charity wristbands being an indicator of how even fashion has sobered up – a more moral approach to marketing could be the best way forward. Marketing consultant Colin Morley urged businesses to develop a more moral approach to marketing. As a core member of the “Be the Change” group, advocating a caring work ethic through events, lectures and workshops, he offered advice on promoting the idea of brands with a conscience – mixing ethical, social and environmental concerns into the corporate cocktail.

It was an idea that Morley maintained also affected the individual: developing a more personal moral belief system would also benefit people’s working life. His own life was cut short on July 7, when he was among those killed in the Edgware Road bomb blast. Among many tributes on the Be the Change website, one read that Morley “had time for everyone, valued everyone, and respected everyone”. The Be the Change project continues.

A popular way to escape the horrors of the modern world is to escape to the country. Rachel’s Organic has promoted a series of events this summer at National Trust properties. They included gourmet kitchen tours, cooking with wild foods and “exploring culinary delights from medieval times to the present day in the company of costumed characters”. It was all part of a campaign called From Plot to Plate, promoted across the company’s product range and described as being “part of a national learning initiative”. These days, it seems, it is not good enough merely to order a product: you have to know what to do with it when it arrives as well as having it placed in historical context.

The opposite strategy to Rachel’s Organic’s comforting rural events is to give customers a shock. This was a tactic employed by Ocado recently to promote its “Totally Devoted” home delivery service for Waitrose. The promotion offered customers £5 off their next delivery if the previous one had arrived late. Customers who hadn’t used the service for a while were sent cards telling them they were now “Missing”, in bold letters. Their name and address were printed below with the words: “Last seen receiving groceries at this address some weeks ago”. “We just want to make sure you’re OK,” the cards went on, in a manner that was either reassuringly personal or slightly creepy, but at least provoked curiosity.

Shock tactics can be fun – and creative too – particularly when they involve a degree of surprise. Kaufman mentions a campaign he worked on for Abbey, which used “lower-cost guerrilla-style activity to pre-empt and complement a traditional above-the-line campaign”. Kaufman’s team went out armed with wallets that contained a half-visible fake £50 note. The wallets were left in target locations such as the bathrooms of fashionable bars and shop changing-rooms. Kaufman explains the rationale: “When the recipient opened up the wallet, the inside of the fake £50 read: ‘How much money have you lost on your mortgage this month?’ – which tied in with the strapline of the television campaign.” Link distributed 10,000 wallets nationwide and the Abbey website received a record number of hits on the weekend of the activity.

There are less underhand ways to get supermarket customers thinking. Tyser Special Risks marketing director Charles O’Reilly says: “Typically, a promotion has to change behaviour as a potential consumer negotiates the supermarket aisle. The promotion has to create an immediate charge and connection with consumers if it is to alter their course of action.”

Dogs Today Magazine took the lead with shoppers at Tesco recently, launching an exclusive in-store promotion that gave proud owners the opportunity to see their dog become the cover-star of a future issue of the magazine – the Sienna Miller of the dog world. To win, readers had to write in with reasons why their dog would catch the eye on the newsstand.

The modern consumer is likely to be hooked on sudoku and Test the Nation. As ever improving A-level grades seem to show, we are becoming cleverer all the time, so brands need to smarten up, not dumb down.

Kaufman says: “Brands have the opportunity to create a stronger relationship with consumers by engaging their curiosity or intellect.” Lazy jingles and cheap baubles are past their sell-by date. It is time to get serious, but not to stop having fun. It is no longer a case of brands tapping consumers on the head and asking: “Is there anybody in there?” Rather, they are asking: “How can we let you out?”

Coates is holding a four-way pitch for a consumer advertising push next year for its Plymouth Gin. It is understood that the ad campaign will cover the core premium gin brand and introduce brand extensions. The distillery is owned by Vin &amp; Sprit (V&amp;S), which also owns the successful premium vodka Absolut. V&amp;S would like […]

A row seems to have erupted between The Guardian and retailer WH Smith over the newspaper’s launch in Berliner format next Monday. The retailer has criticised Guardian Newspapers’ handling of the launch and with less than a week to go, a source close to the situation says that a lack of information over the delivery […]

A new rapid-hydrating bottled water called HydroPower aimed at sports stars and health-conscious consumers is to launch in the UK. HydroPower, which its makers claim comes from a pure spring source in the US, will mostly sell in health food and organic stores, but 40 per cent of customers are expected to be sports players. […]