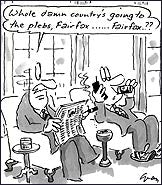 The whereabouts of VS Naipal, one of Britain’s greatest writers, has been revealed as somewhere in Wiltshire, though to judge from his recent comments about life in the UK he might as well have spent the past 20 years in his native Trinidad.

As if waking from a coma, Sir Vidiadhar rubs his eyes and declares in dismay that Britain has “become an aggressively plebeian culture that celebrates itself for being plebeian”.

He blames the Blair Government: “I am depressed by its dreadful use of rhetoric, the misuse of language. I hate all its language.”

There’s little to argue with there. But in truth the roots of Britain’s coarse culture go far deeper than Blair’s empty slogans. Put simply, popular culture is no more or less than what the masses like and want, how they talk and dress, and so on. So there has always been popular culture. What makes today different from the past is the fact that plebeian tastes and preferences have become dominant, imitated by the middle classes and celebrated by government.

So how did the victory of proletarianism come about? The answer is part social, but largely economic. The economic emancipation of women, which led to couples enjoying double incomes, combined with the economic successes set in train by the Thatcher administrations and sustained, by and large, by succeeding governments have made Britain’s masses better off financially than at any time in our history.

With wealth comes power, and that power is translated through the market into what Sir Vidiadhar deplores as plebeian culture. Increased wealth also brings increased leisure, so the process of dumbing down is fed insidiously by empty, mind-rotting hours spent watching TV.

Perhaps what takes Sir Vidiadhar by surprise is the acceleration of an all-engulfing popular culture – a tide so stupendous and unavoidable that it threatens to rush over Wiltshire. Marketing is to blame for this. As it is for Blair’s eager populism.

Thatcher started it. Her early electoral successes were attributed, rightly or wrongly, to the efforts made on her behalf by the brothers Saatchi. The lesson was noted by Labour during its painful years in the wilderness and translated into action by the sinuous and artful Mandelson, who succeeded in “rebranding” the party and getting it elected.

Now in power, Labour believes the methods by which it attained office must be used to sustain it in office. Hence the ever-present need to suck up to the plebs – something that used to happen only at election time, and then it was restricted to kissing working-class babies.

The trouble with manipulating markets, which is what the marketing industry tries to do, is that in seeking to second-guess what might appeal to the masses the whole downward spiral is hastened. The result, more often than not, is to turn something that was both popular and good into something that is vulgar and bad. Take three examples: tourism, pubs and cricket.

With greater prosperity came greater mobility. For the first time, ordinary people, for want of a better term, were free to get into their cars and explore these islands. Nothing wrong with that, until the advent of the heritage and leisure industries. Today, our countryside and history are sold and marketed in a showy and tasteless charade that strips them of their intrinsic appeal and substitutes a kind of funfair. You are entering Shakespeare Country. Roll up! Roll up! Land of the Bawdy Bard and Comely Wenches!

The public house was once one of this nation’s glories. Individual, quirky and varied, they sprang from popular and local culture. Inn signs were created as a marketing tool in an age when most of the population was illiterate but could recognise the Crown &amp; Anchor when they saw it painted on a board. Now that most can read, the old signs are being torn down and replaced in an awful process of “firkinisation”. There is no evidence these changes are in response to popular demand. Quite the reverse, with local people often protesting when, overnight, the Cat &amp; Fiddle reincarnates as the Piddled Newt.

As for poor old cricket, Lancashire Cricket Club chief executive Jim Cumbes protested last week that he was not allowed to go as far as he would have liked to promote the one-day international between England and Zimbabwe: “If we’d had our way, we’d have had fireworks, we’d have loud music… This is cricket all the time – nobody is ever radical enough to want to change things.”

Dear god, how much change does he want? As it was, the game was played partially in floodlight, in coloured costumes, with a white ball, black stumps and sightscreens, and it was officiated by umpires dressed like warehouseman’s mates. Why not make the players ride monocycles and wear revolving bow ties?

Lord Evans, a Labour peer appointed to run a Government advisory body on museums and libraries, said in his first speech that museums were elitist and should display their exhibits in pubs and places where ordinary people could appreciate them. The Elgin Marbles would look well on the outfield at Old Trafford, provided of course that they were first sprayed with day-glo paint and wired for sound.