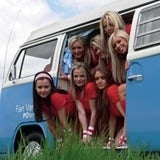 Advertising is a simple business really, as P&amp;O’s agency Designate has illustrated perfectly with its viral campaign, which brings a new slant to the beautiful game.

What better way of promoting ferry travel this summer than by squeezing as many scantily clad models as possible into a camper van just for the pleasure of football fans?

So simple, yet so clever.

The new viral ad for the ferry service was inspired by news that all the camper vans in the UK have been bought up prior to this year’s World Cup in Germany.

In a bid to encourage footy fans to travel to Europe by road and ferry, the ad offers fans the chance to win a classic 1974 VW Camper Van by simply guessing how many models can fit into the vehicle after closely watching a film of them limbering up and clambering in.

The ad also offers useful tips about getting to Germany and crossing the channel with P&amp;O.

The Diary has stood on a few terraces in its time, but has yet to experience one quite like that in the viral.