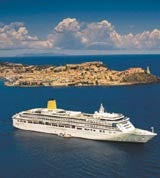 P&O Cruises denies any suggestion that its brand will be damaged by the crisis involving a stomach virus on board its luxury liner Aurora.

The ship, which hosted this year’s Marketing Forum, is due to dock tomorrow (Thursday) in Southampton. The cruise liner, which has seen up to 500 passengers struck down by a contagious norovirus, was turned away from the Greek port of Piraeus and Spain closed its border with Gibraltar when the Aurora docked there earlier this week.

David Dingle, UK managing director of Carnival Corporation &amp; plc’s cruise division, says: “I really don’t think there is any damage to the P&O brand in the longer term.

“I think the public perception of the problem has been inflated, the reality is that this is a stomach bug which people can always get while on holiday. This is not an issue for a single brand, but an industry issue.” He adds that the industry had to develop “more sophisticated messaging” about the norovirus, which is the most widespread virus after the common cold, and make customers aware of their own obligations regarding personal hygiene and the need to report to medical staff if feeling unwell.

The Passenger Shipping Association (PSA) has just reported a record-breaking year for cruise passengers from the UK, with bookings expected to top 1 million for the first time. Director Bill Gibbons says: “Less than one per cent of worldwide cruise passengers have been involved with the virus to date.”