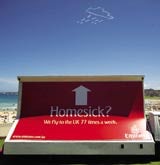 Prompted by the thought that Australia must be half empty, owing to the evacuation of all its half-trained bar staff to the UK’s major cities, Brits have been laughing in the face of Aussie prime minister John Howard’s views on immigration and decamping en masse to the bush-fire balmy beaches and billabongs of Brisbane and Bendigo.

As always, however, there are marketers (or “swagmen” as the Aussies call them) at hand to exploit the deepest neuroses and insecurities of these brave wanderers. As they lie on the beach, soaking up the sun’s rays heedless of Australia’s lack of an ozone layer, expats are being spooked by the appearance of rainclouds, something they thought they had left far behind.

But this isn’t some freak meteorological accident. Those dingoes at airline Emirates have realised that by making the whingeing ex-pats homesick, they can drum up some business on their long-haul Antipodean routes. Throw another Pom on the barbie, Sheila!

The retail landscape is evolving as Icelandic investors look to the UK for rich pickings. But will they plough further cash into these brands, or take their money and run? Amanda Wilkinson reports

Budweiser Budvar chief executive John Harley has left the company after three years, without a job to go to. Harley joined the Czech lager company as marketing director in early 2002, and proceeded to raise the stakes in the company’s tussle with the US Budweiser brand, owned by Anheuser-Busch. The companies have a long history […]

Sales promotions are taking a more central role in marketing campaigns, but brand owners should bear in mind the dangers of promising too much. A little creativity can have greater impact than a big budget, says Gary Eastwood