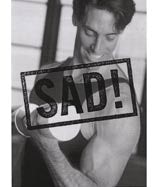 The group said a washroom ad, created by Abbott Mead Vickers. BBDO, for the tablets encouraged excessive drinking and an unhealthy lifestyle. The complaint was also upheld this week by the Advertising Standards Agency (ASA).

The ad, part of a large-scale TV, radio and poster campaign, showed a photo of a muscular man lifting a dumbbell with the word “sad” printed across the photograph. The strapline, which appeared next to a picture of the Alka XS Go box, read: “Go out, have a laugh, be alright”.

The ad formed part of a &£1.4m campaign, launched in December, to promote the tablets, which contain caffeine and painkillers. Bayer is trying to fight back against the growing demand for energy drinks such as Berocca, which are encroaching on its market.

The ASA rejected arguments from Bayer that the ad was ironic and made comments about lifestyles which did not appeal to the target market.

Bayer also tried to argue that its research showed that only a small percentage of people believe the ad refers to alcohol consumption, thinking it is instead about living a relaxed lifestyle.

Good design is not just about the look of a product, or winning awards. Innovation only happens when every part of a brand is considered, from design, through to parts manufacturer, to resellers and the customer

The sponsorship market is becoming tougher. Even the big boys are finding it hard to get money, so think what things are like for smaller companies. Ever ready to help, the Diary would like to draw readers’ attention to a press release it received from Combe Martin Wildlife &amp; Dinosaur park in North Devon. The […]

ITV Digital is closing, leaving up to 23 marketers out of work and other digital platforms scrabbling to pick up subscribers that have not already deserted the service. Marketers affected by the closure include marketing director Jeremy Dale, director of brand Alison Victory and director of marketing strategy Catherine McGrath. The administrator laid off up […]