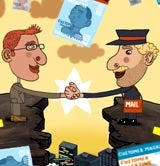 In any mutually beneficial relationship, there are times when one side has to be reminded that, without the other, the benefits would not exist.

This is what happened to the Royal Mail about two years ago after a long and fractious, but highly lucrative, relationship with the contract publishing industry.

The Royal Mail was going through a particularly low period in 1999. It was putting up prices and behaving like the monopoly it was soon to cease being. Publishers were particularly annoyed – both contract and business-to-business publishers knew how much revenue they provided Royal Mail with, but seemed unable to make the company, an organisation known for its endless processes and monolithic structure, listen.

Today the picture is very different. The relationship between the Royal Mail and the Association of Publishing Agencies (APA) is beginning to resemble a Sixties love-in.

Grahame Lake, managing director of TPD and current chairman of the APA, says: “I think the Royal Mail did its sums and realised the value of contract publishing to its business.”

In fact, the APA did the sums for it. Two years ago, when the relationship between the two sides was at its lowest, Peter Moore, publishing director at Mediamark, started his two-year stint as chairman of the APA. The Royal Mail had just increased its Mail Sort and Presstream 2 delivery rates (the main vehicles through which contract magazines are delivered) and was also reducing the sponsorship money it gave to the APA.

Moore says: “At the time Royal Mail saw us as a thorn in its side – we were constantly asking for a reduction in prices.”

It was then that Moore decided that the APA could either “throw its toys out of the cot”, as he puts it, or it could enter into a constructive dialogue with the Royal Mail. It was at a high-level meeting in early 2000 between the Periodical Publishers’ Association (PPA), the APA and the Royal Mail’s then general manager, Adam Novak, that the APA made its case.

It was the combination of these facts, along with a changing climate within Royal Mail as it faced deregulation, that prompted the changes resulting in the more congenial climate that now exists.

Royal Mail’s first step was to flatten its structure and set up a media markets division to deal specifically with publishing (whether consumer, business or contract).

For the next step, Royal Mail introduced account managers to handle individual publishers’ business. This has made an enormous difference to publishers, which had previously found it very difficult to obtain specific answers to their clients’ questions on quotes and pricing structures, and were thus unable to tell their clients what postage costs were likely to be.

One of the biggest problems publishers had with the Royal Mail was that any successful publisher or magazine was in effect penalised by the company – the higher the frequency or circulation of a magazine, the more money had to be paid to Royal Mail. When this was pointed out, Royal Mail introduced a number of initiatives and discounting schemes (up to 50 per cent in some cases) which would allow new magazines to test the market and would also allow publishers to test different frequencies without spending huge amounts of money. Royal Mail is now researching the viability of introducing another Presstream service for publications whose distribution is not time-sensitive.

But why did it suddenly do a U-turn and become much more customer friendly? Despite the threat of deregulation, it remains in a very powerful position. Although the Royal Mail has faced competition from independent magazine distributors for years, the truth is, as Lake puts it, “no one else can deliver 250,000 copies across every postal district in the country”.

Lake says: “I do think it was an awareness of the real commercial power that lay in contract publishing. We have worked out that for every £1 earned by a publisher, 40 pence goes to Royal Mail in delivery costs. I think it realised that it needed the contract publishing business to grow in order to grow itself.”

Although the relationship is much better now, Royal Mail will still have to work hard to keep the contract publishers sweet.

Redwood production director Niki Webb says: “The relaxation of the monopoly will bring about huge changes in the contract publishing business. We are already in discussion with two large alternative carriers. We have seen the Roy

al Mail being flexible in areas like city and international delivery, where competition is plentiful. Now we need to see it move quickly to retain Presstream business.”

She adds that Redwood titles represent 15 per cent of the Royal Mail’s total Presstream traffic and yet “it is the only supplier we deal with which does not apply standard commercial measures to the retention of our business”.

Other publishers are not so Royal Mail-friendly. Elisabeth Bolshaw is publishing director of Citroen Wolf Communications, which produces titles for clients including PricewaterhouseCoopers and Bafta.

She says: “All our business titles are mailed out directly, usually to about 25,000 UK addresses. The majority of our mailings weigh under a kilo so they have to be distributed by Royal Mail. If there were effective competition to Royal Mail for this, I would certainly investigate.

“It’s a shame that Royal Mail has put so much effort into an unfocused rebranding, to Consignia, instead of investing more time in customer service and satisfaction. The company smells of the Fifties, with its deeply institutional protocols and its focus on obstacles rather than solutions.

“We always receive a large number of returns from the Royal Mail which are ‘undeliverable’. A small amount can be attributed to incorrect database details but we clean our databases every month and believe we are very accurate in our targeting. Royal Mail does not fill its customers with confidence.

“As a company we have repeatedly invited our account manager in to discuss striking annual deals across all our titles, but there is never any question of arranging a special deal. Unless the Royal Mail becomes more competitive in its thinking, it will, like British Gas, suffer drastically when competition is introduced.”

In addition, when a recent PPA initiative measured the Royal Mail against three other European post offices, the Royal Mail came out as the least efficient.

Kearney acknowledges that publishers are constantly looking for alternative distribution methods and believes that makes commercial sense – “it also keeps us on our toes”.

He adds: “We are fortunate, however, that if a magazine could be going to any of the 26 million households in the country, there would be a bias towards using us. But I also know that publishing agencies do not exist to generate revenue for us.

Clearly, the Royal Mail could, and probably should, do much more to make life easier for its clients. Kearney himself admits that he’s sure publishers want more from the relationship. However, it is also true that the relationship has never been better – undoubtedly helped by the fact that, according to Lake, Royal Mail “now seems to have people working for it that have fire in their bellies. They really want to change things. It feels like much more of a commercial organisation than it ever used to.”