The ad sees Postman Pat accidentally sit on his glasses and break them. Because he hasn’t taken advantage of Specsavers’ deal to get a spare pair he carries on with his postal round without his glasses, wreaking havoc around Greendale as he goes.

Postman Pat was chosen by Specsavers’ because he is “well known, glasses-wearing hero,” universally loved by all ages.

The creative is faithful to the 1981 set designs of the Postman Pat series, and filmed using stop-animation on a 16mm camera to create the same look as the original production.

The ads were created by Specsavers’ in-house design team which creates all its advertising.

The TV, radio and online campaign breaks on 1 September. 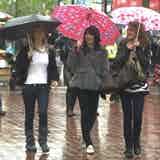 Tesco has enlisted its own team of weathermen to make sure it stocks the right products throughout the changeable British seasons.