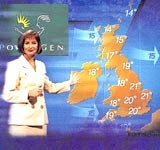 PowerGen is reviewing the creative account for its ITV weather forecast sponsorship.

The energy supplier has asked eight unnamed agencies to pitch for the account, which is worth about £1m.

It is not clear whether Saatchi &amp; Saatchi, the incumbent creative agency, has been invited to repitch for the business.

A PowerGen spokeswoman says Saatchi has not worked with the utility company “for a very long time”, but the company declines to say whether the agency has been fired.

PowerGen became ITV’s first regular weather sponsor in 1989, in a deal intended to build awareness of the PowerGen brand.

The ITV weather sponsorship includes 12 distinctive characters – called WeatherGens – that appear at the start of each broadcast and represent the range of moods of the weather.

PowerGen manager for brand and internal communications Chris Whelan is overseeing the pitch.