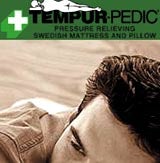 Danish bed company Tempur has appointed Prager and Partners to its £3m direct-response account as part of an initiative to reposition the brand.

Tempur makes mattresses that adjust to the body weight and temperature of the user. They are made from material originally created for NASA astronauts and are said to give a feeling of weightlessness.

The company is seeking to attract younger, more upmarket buyers. The beds cost about £3,000. The slogan “developed for space – making life better on earth” has been used to promote the beds in the past.

Prager will develop direct response campaigns that are likely to span TV, radio, new media and inserts. Until now Tempur has mainly used press advertising. The agency won the account after a two-way pitch with incumbent Attinger Jack Advertising. The creative work is being carried out by MBO Solutions.

“In only a few years Tempur has become the market leader in sleep technology,” says Prager managing director Ian Maynard.

Tempur was founded in 1992 but only introduced its range to the UK at the end of last year.