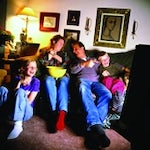 Of viewers watching pre-recorded TV via services such as Sky Plus or hard drives, 86% say they always fast forward through the adverts, according to research carried out by YouGov for Deloitte and revealed today at the Edinburgh Television festival.

Only 13% of viewers watching standard TV watch the entire advertising break, while 11% never watch it.

Viewers might be encouraged to watch ad breaks if they were shorter(48%), or if ads themselves were shorter (17%) and more memorable (32%).

However, the report found that TV remains the most memorable and most impactful type of advertising.

More than a third (36%) say they pay most attention to traditional TV ads and it is regarded in the top three forms of advertising by 56%.

Online video adverts have failed to make an impact on consumers with only 3% citing them as the kind of ad they were most likely to pay attention to.

James Bates, Deloitte media partner says: “The UK’s appreciation of television advertising appears to remain robust. However while television generates billions of commercial impacts every day, it is hard to measure precisely how many of these are viewed.”