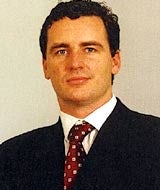 The Premier League has brow-beaten Pearson for “indulging in speculation” after it announced the &£48m three-year deal last week.

Pearson also said the Premier League would be better off without a title sponsor and that commercial and sponsorship rights should be negotiated individually by the 20 clubs in the league.

But in a statement, the FA Premier League, says: “The sponsorship success is especially satisfying for our marketing and sponsorship department, which has done an incredible job.

“We will all look forward to reading Mr Pearson’s reaction next time he chooses to indulge himself by speculating on the content of our commercial deals.”

Pearson says: “Obviously my congratulations go out to the Premier League on securing a fantastic deal.

“But I was not, as it says, indulging in speculation. I was merely reacting to questions posed to me by the industry press.”

Pearson left the Premier League in controversial circumstances after resigning to set up his own sports promotions agency, Sportacus.

Not wishing to sound pious, the Diary is rather disturbed by the latest attempt by marketers to capitalise on people’s personal hell. Brookman, divorce lawyers, has given the thumbs up to Islington ad agency Joslin Shaw for a hard-hitting poster campaign aimed at couples on the edge of a marital breakdown. Ads featuring images of […]

The National Basketball Association UK (NBA UK) is aiming to attract strategic partners in the telecoms and food industries to exploit the teenage and young adult market. The NBA claims basketball is already the second most popular sport for tento 17-year-olds, with about 900,000 children playing regularly. The organisation already has high-profile partnerships with Budweiser, […]

Last week Johnny Hornby announced that he is to leave TBWA/London to set up his own agency, taking client Carphone Warehouse with him. All agree that Hornby is ambitious, but some label him a greedy ‘champagne socialist’ while others admire hi