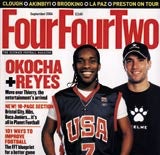 Winning has been given the brief of exploiting assets belonging to football clubs, broadcasters, brands and content owners across a range of platforms, including mobile services and digital television.

Premium TV commercial director Oliver Slipper says the unit has been set up to encourage content owners and rights-holders which might previously have been put off exploiting new media opportunities, owing to the costs involved and the fear of cannibalising revenue from existing products.

The unit’s first task will be to create an online version of monthly football magazine FourFourTwo, which is owned by Haymarket Publishing.

Premium TV will design, build and manage the editorial content of the FourFourTwo website. News will be written by Premium TV’s in-house editorial team, with features adapted from the monthly magazine. Premium TV will receive a share of the advertising, sponsorship, e-commerce, subscriptions, betting and mobile revenues generated by the site.

Premium TV has 1.5 million registered users and more than 135,000 paying subscribers for its broadband, narrowband and mobile services. It holds the digital rights to 82 UK football clubs and provides digital management services to media companies including MTV, Canal+, Eurosport, Music Choice and NTL.

Premium TV is owned by the former NTL Europe, which changed its name to PTV Inc earlier this year. In June, it successfully renegotiated its deal with the Football League for online rights relating to 76 leading football clubs, releasing it from a loss-making contract (MW June 24).

To set the record straight, the Committee of Advertising Practice had not ordered Wadworth to drop the 6X campaign as your headline claimed (MW July 29). At a recent meeting instigated by Church with the Advertising Standards Authority/CAP it was agreed that the 12-month-old campaign and series of ads had broadly complied with its code […]

In the Special Report on point of purchase (MW July 15) it was stated that PoP as a discipline is “said to be the easiest to measure”. I am delighted this is the case and I would love to know who else has said it. POPAI has been promoting the responsible use of PoP material […]

Gambling authority GamCare and children’s charity NSPCC have criticised online gaming company InterCasino for a CD promoting its website, fronted by a scantily clad woman, which was inserted in Saturday’s Guardian newspaper. The CD came in a cardboard wrap, featuring several pictures of the woman and the words “Come Play With Me”. Inside the wrap, […]