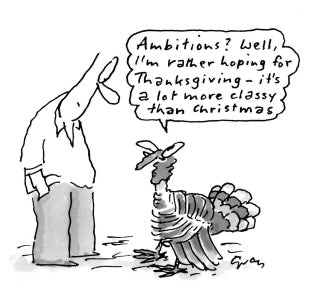 In 50 years we’ll be chewing the fat with our fellows in the annual kingdom and eating them will not be so de rigueur – but not before some humble pie.

Cast your mind back, if you will, across the yawning aeons to the time when man first stood – a little hunch-backed to start with because he was getting used to it – supreme among the animals. How did he express this ascendancy? He took a blunt instrument to the next mammal down the chain and clubbed it to death. Then he ate it.

By and large that has been the pattern ever since. Boiled, fried, grilled, roasted, poached or fricasseed, the beasts of the field and the fowls of the air are delicious hot on a plate or cold between two slices of bread with a dab of mustard. But not for much longer.

Forget global warming – after all, it’s happened before – forget cataclysmic strikes by meteors – ditto – the sea change we are about to experience is truly unprecedented. After 7 million years as a carnivore, homo sapiens is soon to become a vegetarian. Fifty years hence McDonald’s will shut its doors for the last time, abattoirs will become theme pubs, and butchers’ aprons will appear on the Antiques Road Show. Why? Because man will have learned to talk to the animals and he won’t like what he hears. Don’t take my word for it, listen to an expert.

Writing in New Scientist, Professor Daniel Pauly, a fisheries specialist from the University of British Columbia, predicts that within the next 50 years scientists will talk to animals, or at least be able to detect and decode their emotions. “This would first work with primates,” he says, “then mammals in general, then the other vertibrates including fish.

“This would cause, obviously, a global revulsion at eating flesh of all kinds and we would all become vegetarians.”

When you think about it, it stands to reason. What man, still less a woman, able freely to converse with a lobster would fail to feel a pang of remorse at the cruel injustice done to its kind over many years? On hearing it talk whimsically of the joys of spume and surf, and proudly of its little nippers (who would have thought that crustaceans enjoyed a pun?), it would be hard indeed to seize the living creature by the tail and plunge it into boiling water.

But we are getting ahead of ourselves. Prof Pauly says we must start by sitting down and chewing the fat – figuratively of course – with a primate. One hopes that in offering this advice the professor does not imply that in choosing first to socialise with an ape one is starting at the top and working down. It would be discomforting at a later date to be accused of snobbery and shunned by an eel with whom one wished to pass the time of day.

Assuming that is not so, and one is able to enter into discussions with a gorilla untrammelled by considerations of rank or status, it would nevertheless be unwise to make assumptions.

For while it would be prudent to play down social distinctions, cultural differences are harder to ignore. Your average gorilla has to the human eye a certain brutish aspect suggestive of a preference for the physical over the cerebral, which is why I suggest we melt the ice by sending an emissary in whom the animal would recognise a kindred spirit. Ross Kemp would be ideal.

The real problems, however, will be encountered elsewhere in the animal kingdom. After all we do not eat big apes, or even small ones for that matter. As Prof Pauly implies, the embarrassment will lie in meeting sheep and cows and pigs. It might help to get things off on a sound footing if we were to adopt the fashionable policy of issuing an apology for past misdemeanours. Something along the lines of “we deeply regret having butchered and roasted your ancestors and accept that the mint sauce was a mistake” would be a step in the right direction.

From there on it will be a matter of playing it by ear, but if the professor is right we may expect to encounter some deep emotional responses. It might, for instance, be revealing, instructive and humbling to hear a bull talk about exploring his feminine side, and heart-warming in a very real way to share a rabbit’s experience in coming to terms with his sex addiction.

But where, I ask you, will it end? Might it eventually be possible to delve into the finer feelings of an egg? And will it stop with fauna? We know that Prince Charles talks to vegetables, though, being a sensitive man, he no doubt avoids such topics as boiling and mashing.

What if we should discover a turnip that experienced thoughts too deep for tears? Or meet a raspberry sicklied o’er with the pale cast of care?What then shall we eat?•

The Mayor of London is launching a campaign on supermarket baskets to encourage shoppers to recycle more. It launches this week. The Recycle for London campaign aims to highlight the fact that 75% of products that are in supermarket shopping baskets can be recycled. It will also prompt consumers to use recycling facilities at supermarkets. […]