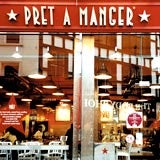 Pret a Manger is seeking its first dedicated head of UK marketing, as the sandwich and coffee shop chain expands overseas.

The role will entail full day-to-day responsibility for the marketing of the chain’s UK outlets, with a focus on promoting stores outside London.

The successful candidate will report to Pret’s international head of marketing, Morag McCay.

Following the appointment, McCay will spend more time in countries where the company plans to roll out restaurants.

A spokeswoman for Pret says: “This position has been created because we want someone based in the UK who can oversee marketing here, while McCay is in other countries.”

Pret’s previous marketing director Charlotte Fuller, who reported to McCay but did not have overall responsibility for the UK, quit to join the BBC as head of audience innovation last year.

Pret revealed in February that it has sold a 33 per cent stake of the company to burger giant McDonald’s. Senior management at Pret claim a complete takeover is not on the cards, but McDonald’s will aid Pret’s expansion in foreign markets, such as the US and Japan, through distribution, real estate purchasing and software support.

Pret’s owners plan to expand their 100-store UK chain globally over the next few years, but consumers and retail experts believe the company risks ruining its customerand staff-friendly image by teaming up with the world’s largest burger chain, which has become the archetypal enemy of the anti-corporate movement (MW February 8).