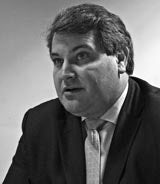 Expect to be driven mad when playing golf with Waitrose director of selling and marketing Mark Price. Both his rendition of Elvis Presley’s Suspicious Minds and his aptitude for the game can be more than a little off-putting. Those who have had to put up with the constant, out of tune repetition of “We’re caught in a trap” probably wished they had brought ear-plugs. And it’s advisable to put in some practice before taking on the man dubbed the Singing Grocer, who is about to become main board development director for the John Lewis Partnership (JLP), covering the Waitrose and John Lewis businesses.

According to friends, when Price left Lancaster University (he studied archaeology) his game was so good he could have turned professional. Although he admits having been able to play off scratch, Price denies that he was pro standard, claiming a career in grocery retail was in his blood – his father set up two grocery businesses.

These days, Price is more used to touring the 166-strong Waitrose retail estate in his chauffeur-driven car than the UK’s golf courses, so anyone thinking of challenging him to a round will be pleased to know his game is not what it once was. But like most retailers, he likes to keep competitive information close to his chest: he refuses to reveal his current handicap.

Early days as a JLP graduate trainee were spent in the department stores, leading to the task of opening the Cheadle branch. In 1998, he got a call from Waitrose’s then managing director, David Felwick, to become the supermarket’s first marketing director.

Felwick had appointed Banks Hoggins O’Shea (BHO) (MW December 18, 1997), now FCB London, but he left it to Price to build a team and to take the brand on to television for the first time.

With his purely operational background, Price admits he was apprehensive. But training at INSEAD and the London Business School gave him some marketing language and knowledge and an inquiring mind helped with the rest, say friends.

FCB London chief executive John Banks says: “He has a very active mind and always wants to improve on what he has just done.”

A fact-finding trip to the US with BHO helped Price to develop a positioning for Waitrose, based on core values of product quality, good customer service and value for money. Price says: “In the US, there is the same kind of polarisation we are getting in the UK, between the discounters – or those that sell food but are not food specialists, and I put Wal-Mart in that category – and the real food specialists.” He adds: “We identified early on that British consumers had been duped into thinking that value was the same as cheapness. We wanted to say value doesn’t mean buying the cheapest: it’s a combination of price and quality.”

Friends describe Price as an ideas man, pointing to initiatives such as the Waitrose Food Illustrated magazine and the company’s free internet service provider as evidence of this.

But not all his ideas have got off the ground – plans for a chefs’ school did not come to fruition, although Price claims this idea formed the basis of a number of other initiatives, such as demonstration kitchens in stores.

Steve Hastings, a founding partner of Isobel, who worked on the Waitrose account at BHO says: “Not only is he an entrepreneur, he is actually able to make things happen in a relatively conservative environment.”

But Price believes in fostering ideas in others as well: “Quite often, I will come up with an off-the-wall idea just to start everyone’s mental processes.”

As well as having ideas, in his new role Price will need to look at all the options and listen to differing views before deciding on a course of action. But one person who knows him well says: “Once he makes up his mind, he becomes rather a closed book, though at least he spends some time examining the alternatives.”

Board development director is a position that has major importance at the JLP, according to Verdict Research chairman Richard Hyman. He says Price is one of a group of “young Turks” that is “changing the culture of the JLP” from being inward-looking to outward-looking.

When Hyman first met Price about five years ago, he says he was surprised to find someone “so dynamic and so forward-thinking in marketing terms” who was “keen to change the partnership’s traditional tried-and-trusted methodology and world-view”.

Price will need to continue to do that if he is to make a success of his new job. He will be looking at the group’s online activities, including its stake in Ocado, and at developing financial services further following the launch of the JLP credit card, which rewards users with vouchers depending on how much they spend. Price, an outspoken critic of loyalty cards in the past, justifies this by referring to the need to offer incentives to make an impact in the fiercely competitive financial services market. He will also be working on a long-term strategy for the group, looking at the status of employees as partners in the business, and at expansion plans.

Price says he is “committed” to the principles of the JLP and believes more should be done to “tell the wider community” about the business and the fact that its employees are, as partners, co-owners and therefore more likely to offer good service.

Expansion is crucial to the future of the group, which is concentrated in the South and the Midlands. It will no doubt be looking for acquisitions to add to the 18 stores Wm Morrison offloaded to Waitrose earlier this year.

Hyman also believes that the JLP as a whole could benefit from “aggressively driving home its value-for-money positioning” as rivals concentrate on price.

In the short term, little is expected to change. Waitrose’s advertising will still be created by Ken Hoggins and Chris O’Shea, who left BHO last year to set up a start-up called HOW. John Lewis uses Burkitt DDB. Clemmow Hornby Inge is likely to be added to the roster soon, to handle a project that looks at the role of the partners, as well as to take on some advertising for Waitrose. Although his ties to the JLP are strong, friends had expected Price, who they say is ambitious and was disappointed he did not get the job of Waitrose managing director, to move on. He was linked to jobs at Marks &amp; Spencer and Sainsbury’s earlier this year. But with a seat on the main JLP board, they say he will be satisfied for the time being. He could even, eventually, be in line for the chairman’s job. In the past, such ambition would have been frowned upon at JLP, but times appear to be changing.

The Portman Group launches a cinema advertising campaign across the UK today (Wednesday) to highlight the dangers of binge drinking among women. Created by London-based agency Iodine Media, the ad highlights the ‘Jekyll and Hyde’ effect of drinking alcohol. It shows the actions of a young woman at work during the week with her behaviour […]

Greene King’s press advertisement featuring the barrel of a gun was created by WFCA Integrated and not Miles Calcraft Briginshaw Duffy, as suggested in Marketing Week last week.

By accusing the UK restaurant trade of being “lazy and greedy”, George Pitcher (MW November 18) betrays a limited understanding of the business. London’s dining scene is one of the most precarious and margin-constrained businesses around, and diners suffer far more at the hands of greedy landlords and expensive importers than from restaurateurs’ pricing strategies. […]