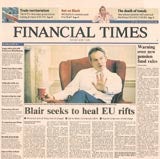 The Financial Times’ (FT) circulation in Scotland has fallen, despite a price promotion that slashed the cover price to 70p earlier this year.

The Pearson-owned title had hoped to boost sales north of the border by cutting its cover price for six weeks between January and March, and by running a radio ad campaign.

But the paper’s own figures show that sales in Scotland fell by about 2.5 per cent during the time of the promotion, although overall UK sales during the six-week period fell five per cent in year-on-year terms.

Other Audit Bureau of Circulations (ABC) figures show that the FT’s circulation was down 3.1 per cent year on year between November 2004 and April 2005. For the same period, the FT’s total circulation was 426,168, representing a drop of 13,320.

That drop was more pronounced in Scotland, where the decline was almost double the average and the statistics show a fall from 7,022 between November 2003 and April 2004 to 6,621 for the same period the following year.

A spokeswoman for the FT says the reduction in cover price was part of a wider marketing strategy and that Scotland had outperformed the rest of the country during the promotion.

She adds that year-on-year figures for April 2005 showed an increase in sales.

“This was part of a wider marketing campaign, and in the future we might look at doing something similar elsewhere,” she says.