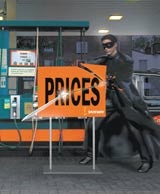 The supermarkets are masters of tactical price-cutting, but the sector was shaken last week when Safeway launched a fuel promotion that stunned its competitors and angered petrol retailers. Supermarkets are not the only businesses that are prepared to slash prices – newspaper industry history is littered with price wars. But attempts to steal market share through price-cutting are not always successful, as the Daily Mirror has just found out after cutting its cover price to 20p in May.

Furthermore, price cuts are costly to sustain. Safeway’s maximum reduction on fuel is equivalent to almost &£1 a gallon, providing customers spend enough on groceries at its stores: they will receive 2p off a litre if they spend &£25, 5p for &£50, 12p for &£100 and 20p for &£150. The maximum 20p discount would equate to a saving of &£10 a week for the driver of an average family car.

There’s no escape from taxes

The 20p reduction brings the price of a litre of petrol at Safeway down to 53p, meaning customers only pay enough to cover duty and VAT. Safeway is effectively giving its petrol away in an effort to increase its share of the grocery market, which stood at ten per cent for the 12 weeks to May 26 (Taylor Nelson Sofres).

On the first day of the promotion, fuel sales at Safeway’s 180 petrol stations rose by 25 per cent and have since remained 20 per cent higher than sales for the same period last year.

Asda, which controls 15.6 per cent of the grocery market, has been the only retailer to react to Safeway’s promotion. It swiftly cut its prices by 0.8p a litre.

Sainsbury’s and Tesco, with 16.6 per cent and 26 per cent of the grocery market respectively, are refusing to be drawn into a fuel price war. They will not budge on their existing pricing strategies. Both retailers guarantee to match the cheapest petrol prices within a three to four mile radius of their stores, but exclude promotional offers from this pledge. Sainsbury’s introduced a petrol discount scheme in 1998, but the maximum discount offered is 4p a litre – awarded when customers spend &£100.

Petrol retailers, rather than supermarkets, have the most to lose from Safeway’s offer. Profit margins on petrol tend to be less than 4p a litre and, unlike supermarkets, petrol retailers are not able to fund losses through other activities. Petrol companies have said they will not be able to compete with Safeway’s promotional prices, but that they will continue to compete on normal pump prices.

The impact will be softened by the comparatively small number of Safeway petrol stations. Large petrol companies such as Shell and Texaco each have more than 1,000 stations throughout the UK. A spokesman for Shell says that, while it is still too early to gauge the impact, Safeway’s 180 petrol stations may not be capable of causing significant damage.

Cutting out the competition

Price wars are not a novel concept. As early as the Fifties, newspapers engaged in them. Price wars have been, and still are, fought in every industry. Price-cutting is often seen as a way to eliminate smaller competitors, grab market share and boost sales. But any temporary increase in sales is not necessarily sustained after normal pricing is resumed.

Safeway communications director Kevin Hawkins says a price cut must be backed up with service and quality if customers are to stay with the company. Safeway launched its price promotion strategy two-and-a-half years ago. The ongoing promotion offers discounts on 70 products on a rotational basis, so each week different products are discounted in different Safeway stores. Hawkins claims that more than 1.5 million customers have switched to Safeway since the launch of the strategy, with customer numbers increasing from 9 million to 11.5 million.

Hawkins concedes that converting customers to Safeway will be a difficult task. He says that people who usually shop at a competing retailer may use Safeway during the promotional period, but will only stay “so long as they find our products, service, locations and price satisfactory”.

Safeway is refusing to reveal how long the promotion will run, saying merely that “it will end one day”. If customers respond well and grocery revenue increases, the fuel discounts could theoretically be sustained indefinitely.

Hawkins says: “If the promotion generates high levels of sales it will fund itself, so we could keep it going for some time. But it is a promotion.”

This vagueness has angered industry groups, which are concerned the promotion will become permanent and will therefore be classed as anti-competitive under competition law.

Fury on the forecourts

Retail Motor Industry Federation (RMI) petrol retailers director Ray Holloway is to make a complaint to the Office of Fair Trading (OFT), claiming that Safeway is using its dominant position in the market to engage in predatory pricing. While it is not against OFT regulations to sell products at below their cost price for a promotional period, doing so is deemed anti-competitive if the promotion is sustained.

Holloway says: “This is a flagrant example of predatory pricing. It is unfair trading whichever way you look at it. Safeway is selling below cost by subsidising one part of its business from another.”

Despite Safeway’s claim that the petrol discount is not permanent, Holloway says that the company should back this up with a firm time-frame. He says: “If this pricing is sustained it will damage the industry. Safeway is refusing to say how long the promotion will last, but I think it ought to be defined.”

An OFT spokeswoman says that, while the OFT cannot comment on the Safeway promotion, it will investigate any complaints made on the matter. If the OFT finds that a company is abusing its dominant position under competition law, the company can be fined up to ten per cent of its annual UK turnover.

Hawkins says Safeway is not a dominant player in the fuel market, and that any allegations by the RMI are ridiculous. He says: “I don’t think they understand what competition law is all about. We have 180 petrol stations, which is in no way a dominant position.”

Retail analysts say that pricing strategies like Safeway’s petrol promotion can be an effective way of gaining market share. To be successful, however, they must be well-timed, well-planned and well-executed.

According to Mintel senior analyst Richard Perks, price can make customers switch temporarily to a competitor, but it is not enough to make them stay.

Perks says that, if price was the only factor grocery shoppers considered, Aldi would win every time – yet the budget chain has a market share of just 1.7 per cent. Perks says: “Price-cutting may bring people in the door, but you cannot keep customers on price alone. Customer loyalty has to be earned, not bought.”

Perks nonetheless believes that aggressive pricing strategies are an efficient way of gaining customers. It achieves the fundamental goal of getting new customers into the store, he says, which is the first step in winning them over.

Some observers go so far as to warn that competing on price can be actively detrimental. MindShare press director Paul Thomas cites the latest newspaper price war as an example.

Five weeks on, the price war has been won by The Sun. The News International title still has a cover price of 20p, while Tthe Daily Mirror has returned to 32p in most parts of the country. According to the latest figures from the Audit Bureau of Circulations, the Daily Mirror’s circulation for May was up by only 20,225 on April, while The Sun’s circulation increased by more than 100,000.

Thomas says: “If you have two newspapers at the same price, why would anyone switch between them? They did the same things at almost the same time, so they haven’t really gained anything.”

He says that all the newspapers managed to do was to devalue their brands: “They may have gained or lost a few readers here and there, but not to any dramatic effect. All they have done is damage the credibility of their brands.”

He believes both publications would have benefited more by investing in improvements to the product.

While this latest price war may not have been successful, however, history has proven that newspaper price wars can be a useful weapon.

In 1993, Rupert Murdoch provoked the most famous newspaper war in history when he cut the cover price of The Times from 45p to 30p. The Daily Telegraph followed suit in 1994, cutting its price from 48p to 30p – leading The Times to drop a further 10p to 20p. Desperate to stay in the game, The Independent cut its price from 50p to 30p later that year. By the end of 1994, prices were rising again.

Price, then, can be an effective marketing tool – but it must be combined with a thorough strategy incorporating quality, service and customer retention. Implemented properly, price-cutting has the potential to bring down competitors and boost sales. Done badly, it can be a destructive waste of time and money.

The traditional pitch has gained a rival – the workshop, where agency and client spend time together working on ideas. Is this an improvement, or are workshops just as artificial as the old pitches?

SMS company Logica has launched a text service that will enable text messages to be sent to fixed-line telephones and is aiming to attract advertisers to the new service. Unveiled this week at an industry event in Singapore, the Fixed Line Short Message Service Centre is billed as the “first completely inter-operable SMS technology”. This […]