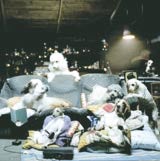 A planned assault on the convenience market by Procter &amp; Gamble-owned Pringles with the launch of a smaller version of the snack in bags has been thrown into doubt because the company is having problems making the product.

It is understood that P&G hoped to take on rival brands such as Walkers and increase its share of the on-the-go and convenience market by launching a range called Mini Pringles. But industry insiders say the company has run into logistical difficulties in manufacturing the snack because it has limited factory capacity and does not want to sabotage production of the core snack. One source adds that there is still no agreed launch date.

The new product, which would be a different shape and 20 per cent smaller than the core snack, will be sold in bags rather than the brand’s usual tube.

P&G has increasingly been looking at ways to stretch the Pringles brand, and it is understood to be planning an overhaul and a range of new products (MW April 21). The brand will also be supported by new advertising, and it is expected brand icon Mr Pringle will be given a facelift.

Last year, P&G launched Pringles Dippers, a range of tortilla-style chips for dipping, and a range of dips. It was the first extension of the brand (MW January 22).

EMAP has asked Marketing Week to point out that it owns a 27 per cent stake in radio group Scottish Radio Holding, whereas GCap Media does not hold any stake in the company, as suggested in last week’s issue.

Modelling themselves on the Dove ‘real women’ concept, Conservative MPs are ditching the strait-laced persona and are letting their true selves hang out