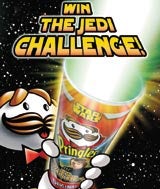 Pringles, the Procter &amp; Gamble-owned snack brand, is teaming up with Lucasfilm to launch a “Win the Jedi Challenge”, promoting the final Star Wars film.

P&G claims that the promotion, which launches next week, is its biggest film tie-up to date. It will be supported by a &£1m marketing campaign, including television advertising, which is expected to break imminently.

The promotion will offer consumers who find a lightsaber sticker inside 200g cans the chance to win a range of prizes. The top prize is the chance to train with the Lucasfilm stunt team.

The promotion runs across the brand’s four core flavours. The packaging will also feature characters from the film including Darth Vader and Yoda. Star Wars Episode III Revenge of the Sith is scheduled to open in the UK on May 20.

The Star Wars promotion comes ahead of plans to revamp the Pringles brand and launch a new range of products.

The adult snacking market has become very competitive with the entry of brands such as Walkers Sensations, Kettle Chips and premium brand Phileas Fogg.

Last year, Pringles launched the first extension out of its core range – Pringles Dippers (MW January 22, 2004), a range of dipping chips – in an attempt to win back market share.