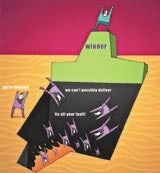 Who Wants to Be a Millionaire? might be one of the UK’s most popular game shows but when it comes to promotions it seems that big cash prizes no longer pull in the punters.

THE PRIZE IS RIGHT

Halstead believes that a headline-grabbing prize is therefore far more effective nowadays than a large cash prize. HH&S has run the Daily Mail’s Dream Cottage promotion, where readers collect coupons for a chance to win a country cottage, for over ten years. The competition is as popular as when it started and regularly attracts more than 1 million entries. “The cottage has a perceived value far beyond its intrinsic value,” says Halstead. In addition, he believes that the paper’s policy of featuring the winners adds credibility to the promotion. “People always tell me that they never expect to win so showing the winning couple outside the house keeps interest high and encourages people to enter,” he adds.

Millennium managing director Martin Smith’s experience with Damart and other clients has convinced him that relying on a single, high-profile prize is risky and that successful campaigns should include a more winnable range of premiums priced at up to 25 per cent of the main offer in order to attract consumers. “The big prize creates excitement but, if you want to maximise responses, then secondary prizes, possibly combined with a gift-with-order offer, can have the highest perceived value,” he says. He also points out that while consumers repeatedly tell researchers that they prefer money off to promotions, they still respond far more strongly to a well-devised promotion.

Campaign Works managing director Rob Conway believes that, for a big prize to work, it has to be relevant to the brand it promotes: “You should look at any promotion from a total communications perspective,” he says. “A competition with an appropriate prize can accentuate the overall message and brand values.”

Campaign Works has recently run a successful promotion for Hilton Worldwide Resorts in association with The Sunday Times to win a two-week, all-inclusive, exotic holiday. Although Hilton offers a greater range of worldwide resorts than other operators, consumers rarely considered the company when choosing an exotic destination. Running a promotion with a media owner, says Conway, is a good way to secure publicity on a shoestring. The combination of relevant prize and editorial coverage helped Hilton to raise awareness of the range of its resorts and counter consumer misconceptions.

Simon Marjoram, director of sales promotion agency Geoff Howe, believes that promotions like this work because the prize is unique to the brand. “We look for something that only our client can offer,” he says. “If necessary, we will create that platform if one doesn’t already exist so that we can give consumers a ‘money-can’t-buy’ prize.” When Disney decided to take a risk on launching the video of Aladdin outside the normal Christmas period, they briefed Geoff Howe to generate as much interest as possible. The agency worked with Disney to create 20,000 unique prizes, such as a Mickey Mouse birthday party. A total of 1.6 million entries were received and each was attached to a helium-filled balloon and launched in a major publicity stunt. The event generated considerable media interest and was covered by Record Breakers and both Sky and BBC news.

“We had the budget to both make it exclusive and offer lots of prizes,” says Marjoram. “However, you can apply the same strategy on much lower budgets too.” Geoff Howe proved this on a subsequent project for Disney to launch Winnie the Pooh. The client was keen on a traditional gift-with-purchase promotion but was concerned that a cheap gift might undermine the brand’s reputation. The solution was a competition to join the Blue Peter gardening team in recreating 100 Acre Wood. “The trick,” claims Marjoram, “is to create something that only your brand can do.”

Geoff Howe has also used this approach with client Samsung which sponsors a British Superbikes team. The agency devised a recent text-to-win campaign offering customers the chance to win two nights in a luxury motor home at the next Superbikes race. Winners will also meet and have dinner with the riders and be taken on pit tours. “For a racing fan, this is the ultimate prize but it doesn’t necessarily cost Samsung significant sums,” says Marjoram.

Mark Whitmore, director of integrated agency Swordfish, agrees with the importance of choosing an exclusive prize but goes one step further. Swordfish applies what it calls “the Three Ps” test to every promotion it runs. Whitmore explains: “The right prize is only one part of the equation. You also have to consider playability and probability.” He believes that too many promotions miss out on these last two and that this can make the difference between a good and an outstanding promotion.

“Consumers are sophisticated when it comes to competitions,” says Whitmore, “and will weigh up their chances of winning.” As a result, some of the most successful promotions are small, local events offering lots of low-value prizes such as T-shirts and free drinks. This sort of promotion is particularly popular with drinks brands and can ensure a high impact in a small venue. Rob Conway recalls one such promotion for Budweiser where, with 50 prizes on offer at each location, consumers drank the bar dry in their enthusiastic efforts to win.

Whitmore would doubtless agree that this proves the importance of playability – making sure that consumers find the promotion fun. This can be particularly important for clients with small budgets who need to work hard to attract consumers. Swordfish has recently been nominated for an ISP Award for its campaign for Boomerang Media aimed at boosting pick-up of the postcards it distributes in bars and clubs. Swordfish’s answer was a treasure hunt with a difference.

A diamond-encrusted solid gold boomerang was commissioned and hidden in the UK, with clues placed on postcards and a dedicated microsite. Children’s author Terry Deary, of Horrible Histories fame, was roped in to create media interest by promoting a theory that the boomerang was first invented in the UK rather than Australia. The story created considerable controversy and generated further interest in the treasure hunt.

One of Whitmore’s favourite promotions, which he claims scores highly for playability, is Ribena’s Win A Donkey competition, which doubled sales by capitalising on the launch of Shrek 2. Thankfully the winners realised that the promotion was for fun and, unlike Bart Simpson who famously insisted on claiming the elephant he won in a radio competition, have not insisted on taking the prize home with them.

So are the days of the large cash prize well and truly over? Mark Whitmore thinks that there can still be a place for them: “Cash prizes are easy to communicate so if you are short on time or space to convey a complex message then they can be very effective and appealing,” he says. “However, they really don’t say much about your brand.” Nor, of course, do they win awards. Big prizes look set to stay.