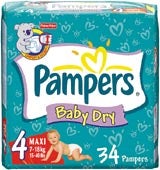 Procter &amp; Gamble (P&G) is to extend its Pampers nappy brand further with the launch of a new baby wipe in August.

The roll-out of the Pampers Kandoo wipes follows closely the relaunch of Pampers Baby Dry diapers range, which was backed by a &£5m advertising and marketing push (MW last week).

Pampers already produces a range of wipes called Sunnies, which have sunscreen lotion for babies’ skin. In an effort to maintain share in a dwindling market, Pampers Kandoo will be targeted at children who no longer wear nappies.

Rival Kimberly-Clark recently announced a &£6.8m relaunch of its Huggies parent and baby club (MW May 23).

The advertising and marketing plans for the launch of Kandoo product are not yet known. Both the new Pampers ranges, Kandoo and the Pampers Baby Dry range will be backed by a television, print and direct marketing campaign, with creative work by Saatchi &amp; Saatchi and media through Zenith Media.

Scandal and regulation have forced electricity and gas suppliers to modify their sales practices. They have found a new class of ‘switcher’ in the process

Walkers’ Doritos brand is to be the new club sponsor of First Division club Wolverhampton Wanderers, in a two-year deal worth up to &1.5m, depending on the club’s success. The Doritos logo will feature on the Wolves shirts from August and is the biggest deal in the club’s history. It includes branding around the stadium […]