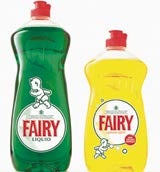 Procter &amp; Gamble (P&G) has unveiled the next stage of its revamp of the Fairy cleaning brand with plans to overhaul its dishwashing products next year.

The Fairy antibacterial dishwashing range will be replaced in January by a three-product line known as Naturals. Variants will include eucalyptus; tea tree, orange and lemon; and lime and lemongrass.

The launch will be supported by a £2.5m advertising campaign. This will include a TV campaign created by P&G roster agency Grey Worldwide. MediaCom handles media buying for Fairy.

Fairy brand manager Simon Michaelides says: “We have developed Fairy Naturals closely with our consumers, reinventing our antibacterial range to give them a great new product that we know will be a big hit.”

Industry sources say advertising will focus on the natural sources of the product ingredients. One insider says: “The new range will be marketed on how effective it is and its natural fragrances.”