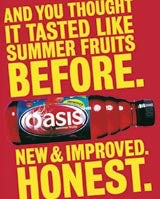 Coca-Cola has been forced to push back the launch date for its premium juice brand Oasis Fusion from September to next year, following production problems.

Industry insiders suggest that the Oasis production plant does not have the desired capacity to produce the juice brand.

The premium variant, which was to feature more exotic and “adul”t flavours, will have to wait until changes have been made to production equipment. Retailers have been told not to expect the launch until 2006.

One insider says: “The production plant is not in a position to produce the Fusion variants. The problem is with capacity. Following an upsurge in demand for regular Oasis, the launch would be impossible without investment in new equipment.”

Another insider adds: “When a product is presented to us we have to plan our promotions and so forth around it. It amounts to a lot of work so it’s always disappointing when launches are pulled.” Fusion was presented to retailers in April.

A spokeswoman for Coca-Cola dismisses the reports as “speculation” and refused to comment further.

Coca-Cola had hoped that the launch would shore up its portfolio as the fizzy drinks market continues to weaken. The move was set to mark the first major investment in the Oasis brand since 2003, when it was relaunched supported by a &£1.2m advertising campaign. However, the company put only &£200,000 behind Oasis last year (Nielsen Media Research).

Sales of carbonated drinks are slowing as consumers become more health-conscious and aware of the contents of sugary, fizzy drinks. Coca-Cola’s take-home sales dropped three per cent by value and six per cent by volume in 2004 (AC Nielsen).