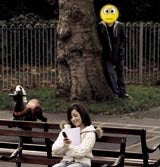 Profero’s “Child Protection on the Internet” campaign for the Central Office of Information is the winner of February’s Creative Showcase Awards, run by the Internet Advertising Bureau and sponsored by MSN.

The ads, set in parks, buses and stairwells to convey a sense of urban realism, feature a predatory figure masked by an emoticon, to illustrate how easy it is to disguise identities on the Net.

To underline how deceptive the Web can be, the viral element involved gossip dropped into chat rooms hinting that tickets to a music event could be won at www.thinkuknow.co.uk – in fact a microsite providing information about how to stay safe online.