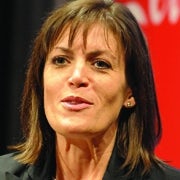 With 2,700 marketers around the world, Coca-Cola requires some inspirational figures at the top of the pyramid to encourage thought leadership and build capability. Wendy Clark, reporting to chief marketing and commercial officer Joe Tripodi, is central to fulfilling that need.

A relative newcomer to Coca-Cola, she moved from a senior marketing role at mobile giant AT&T two and half years ago. She was in telecoms for nine years and prior to that worked agency-side.

“I think Joe was looking for a marketer from outside of packaged goods. He had some unparalleled talent here but wanted to add some diversity, a new dimension,” she says.

Clark was able to spend big budgets at AT&T across what she calls “a huge range of connection points across some really cutting-edge and experimental mobile technology”.

Her job now involves ensuring the marketing team is trained and ready to exploit every opportunity to engage with its customers worldwide, whether it be through sponsorships, experiential events, owned media or earned social media.

“Coca-Cola’s marketing was historically very successful,” she says, “but it needed to pivot and ready itself for a changed landscape.”

It is not uncommon for Clark to find herself briefing Coca-Cola CEO Muhtar Kent and the rest of the leadership team. “They can’t get enough of hearing about social, mobile, data and precision and so on.”

Leadership teams in other less marketing focused businesses will soon find they can’t get away from needing to understand social, says Clark. “The change in the way we talk to customers was driven by social media initially but this expanded into something we should actually now call ’social marketing’ or to be even more accurate, ’social business’.”

Considering Coca-Cola’s more than 26 million Facebook fans, Clark’s thoughts are considered. “Without doubt it’s an interesting number,” she says. “But what is a really interesting number, in the context of the 1.7 billion drinks we serve every day, is 585 million. This is the number of other people that we estimate our fans are themselves connected to [or friends with on Facebook]. It’s almost the whole universe of Facebook and is why creating sharable content and participating in other peoples’ content is our mandate.”

Mobile is also critical to the future as far as Coca-Cola is concerned and Clark is more than comfortable championing that medium.

“We see the links between engaging customers and driving sales,” she says. “When we talk to our customers in the retail environment, they tell us mobile is changing everything. When you can hold up your mobile against a product and find out its ingredients, how it was made, its carbon footprint and so on, then mobile technology is getting pervasive, both product-wise and marketing-wise.”

When Clark arrived at Coca-Cola she immediately gathered her 150-strong team together to galvanise them around a new mission that she sums up as ’big ideas, brilliantly integrated’.

“Everyone knows their job is to come to work every day and develop those really big, fertile ideas that will cut horizontally across the whole business.”

Clark says there is also a need to get away from the notion that a big idea has to be an ad. “An idea does not have to end up as a television commercial. An idea could be a glass that is made out of recycled plant material that is itself recyclable, or a great new label or a machine like Freestyle. Those are all great ideas.”

To illustrate her point she refers to Coca-Cola’s famous contoured bottle, the “greatest living embodiment of an idea that works as well as, if not better than, advertising”.

“You know the saying about the quality of brief and the ideas that come out of it: ’garbage in – garbage out’. The principle of all great marketing is that the brief has to be strong. The brief for that bottle was essentially ’a drink brand you could recognise in the dark or if the bottle was smashed up on the ground’. They met that brief.”