The bottled mineral water market is the fastest growing sub-category in the soft drinks market and its rapid growth shows no sign of abating. New data shows that the number of adults claiming to drink bottled water has risen by ten per cent in the past three years, and further growth will be driven by consumption among children.

The latest data from the Target Group Index (TGI) survey shows that families with five- to nine-year-olds in their households are almost three times more likely than the national average to be consumers of bottled water.

It is essential for brand owners that mineral water is seen as a “cool” drink to encourage children to take it up. Data from Youth TGI shows that penetration in the 11- to 14-year-old age bracket has risen by almost a third over the past four years. Historically, girls have been the key consumers, with penetration among girls at 53 per cent in 2000 and rising to 64 per cent in 2004. Penetration among boys stood at 32 per cent in 2000, and had risen to 45 per cent by 2004.

Peer group acceptance is a key influence on the attitude and behaviour of this age group. The research shows that the number of children drinking bottled water at school stands at 815,000, suggesting that it is becoming increasingly acceptable. Innovations such as sport-top bottles and advertising using sporting icons are helping to drive this acceptance and should also help water to achieve and maintain “cool” status.

There is evidence of a small but growing number of 11- to 14-year-olds who are choosing water over carbonated soft drinks. This group grew from 7.3 per cent of 11- to 14-year-olds in 2000 to 9.8 per cent in 2004. It is also noteworthy that, even among pre-teens, there are distinct attitudinal differences between mineral water consumers and non-consumers. The former are about 25 per cent more likely to prefer food without artificial additives and a third more likely to claim that they are “often trying to lose weight”.

Among adult drinkers, there is a growing split between consumers of still and sparkling water. The latter market has seen growth of just three per cent since 2002, whereas still water saw a 16 per cent rise in penetration, which means more than one-third of the population have consumed still bottled water in the past year. 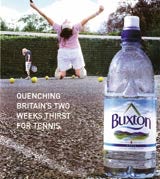 Again there are key attitudinal differences between drinkers and non-drinkers of bottled mineral water. Drinkers of bottled water are ten times more likely than the average to be prepared to pay more for additive-free foods. They are also more likely to claim to be vegetarian and prefer diet food and drink products.

The flavoured water category has shown growth in penetration with an eight per cent rise in drinkers since 2001, which means 25 per cent of adults buy it. There is less overlap between drinkers of flavoured and unflavoured water than might be expected, with only a third of plain water drinkers also consuming flavoured varieties.

The European bottled water market offers some interesting insights for the UK market. Of the four main markets covered by TGI Europa, Germany has the highest proportion of bottled-water drinkers, with 87 per cent of adults being consumers. France is in second place with 85 per cent and Spain is third with 68 per cent. Even though the British market has grown rapidly, with 53 per cent of adults consuming bottled water, compared to its European counterparts there is still a lot of potential for further growth.

There is also clearly scope for an increase in volume consumption by existing drinkers in the UK. The proportion of bottled-water drinkers who report high-frequency consumption (more than once every day) is just 20 per cent in Britain but is at least three times higher across other European markets.

There are differences in attitudes between bottled-water drinkers across the key European markets. For instance, in France the most regular consumers are concerned about health-related matters. They are eight per cent more likely than the average French adult to pay more for additive-free foods and seven times more likely to claim that they are on a diet most of the time. On the other hand in Spain, there is less concern with health among the committed consumers and there are more indications that drinking mineral water may well be a badge of conspicuous consumption and status.

The increasing consumer confidence in tap water and in asking for it in restaurants and bars may well prove to be key in effecting further rises in both penetration and volume consumption per head among adults. But the attitudes and behaviour of children, carried into adult consumption patterns, may well counter this trend and prove to be more significant in the long run.

As dot-bomb memories fade, the online economy is again spawning the dodgy dream-merchants who caused all the trouble last time

Müller Dairies UK is making determined attempts to take on private-label rivals as it struggles to stem declining market share.

Guardian Media Group Radio has announced that it plans to rebrand 102.