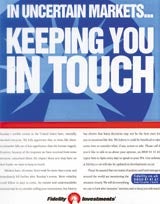 The incumbent beat Saatchi &amp; Saatchi to win the business after Fidelity had whittled down a shortlist of five, which had included Euro RSCG, HHCL/Red Cell and TBWA London.

Fidelity International, which changed its name from Fidelity Investments last month to distinguish it from its American sister company, briefed agencies to develop a campaign that raises awareness of the European brand.

Publicis will initially develop work for the UK market, but the Publicis network also handles Fidelity in Australia, France and Germany and some Asian markets.

Fidelity is the UK’s leading provider of mutual funds such as ISAs and is expanding into new asset management business markets in Germany and South Korea. Last year, it bought the investment arm of online bank Egg, with 60,000 customer accounts transferred to its Funds Network investment supermarket (MW October 21, 2004).

A majority of Fidelity’s media spend is allocated to print and posters. Media is handled in house in the UK and the US, and by Zenith Optimedia elsewhere.

Magazine and radio group EMAP has taken control of Scottish Radio Holdings (SRH) and its network of 22 radio stations in a deal worth £391m. It comes just weeks after the Scottish company turned down its first offer of £375m for undervaluing t

I found your Insight article (MW June 2) on loyalty cards interesting, and yes, traditional points schemes appeal to certain groups, typically women with children at home and elderly “coupon aficionados”, but what about the rest of the population? Younger shoppers are often the least loyal of all and single men tend to be “top-up […]