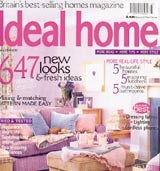 The Bath-based publisher, which specialises in property and travel magazines, is hoping the magazine will revitalise the homes magazine sector by focusing on celebrities inside their homes.

The monthly glossy will have an initial print run of 200,000 and will be available at a promotional price of &£2. The publisher is planning an advertising campaign to back the launch, which is aimed at women aged 30-plus, but has declined to give further details.

Celebrity Homes editor Lynnette Peck says: “The home interests sector has been stagnant for a while and we are hoping to create a buzz. But this magazine will be very different to the likes of Hello! or InStyle, and any of the existing homes titles. The readers will get information about the type of linen, kettles or just about anything that celebrities use inside their homes.”

Sales of IPC-owned Ideal Home, which is one of the biggest selling titles in the home interests sector, were down 1.3 per cent period on period and 0.9 per cent year on year to 273,489 copies, according to the December to June 2003 Audit Bureau of Circulations figures. Trailing behind is National Magazine Company’s House Beautiful, which was launched last year.