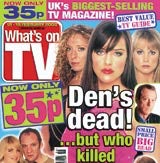 The long-running battle among magazine publishers for readers obsessed with television soaps and schedules has exploded once again. The price war that has recently broken out between IPC Media and H Bauer will be accompanied by a spate of new launches this year.

Hachette Filipacchi, the publisher of Inside Soap, has registered Inside TV as a trademark and is thought to have plans to launch the title later this year. There are also rumours that Trinity Mirror is planning a paid-for TV listings title, pitting chief executive Sly Bailey against her former employer, IPC.

But insiders say Bailey’s launch plans may have been put on the back-burner as Trinity Mirror does not want to get embroiled in the fierce price-cutting war that has erupted between IPC and Bauer.

The first to strike was IPC, when two weeks ago it cut the cover price of market leader What’s on TV by 10p to 35p, a move supported by a 25 per cent increase in supply to retailers. Bauer struck back by slashing the price of TV Choice by 10p to 30p.

These two titles, along with BBC Magazines’ Radio Times, command the lion’s share of the TV listings market and are constantly battling it out for the top spot among the 5 million readers who buy TV listings magazines every week (Audit Bureau of Circulations).

The fight is a fierce one as the market is under pressure from free listings in newspapers, the internet and electronic programme guides. Unsurprisingly the latest set of ABCs, for January to June 2004, show that total circulation fell 2.4 per cent year on year. Media pundits indicate that the latest set of ABCs, due on February 17, will show a similar picture. Copy sales have not really risen since 1997 and according to a report from Frontline, distributor for the BBC, retail sales rose only marginally from £159m in 1999 to £162m in 2004.

MediaCom press director Steve Goodman is relatively optimistic, however: “Regardless of the availability of free listings in newspapers and on the internet, if readers still choose to buy a paid-for copy because they are getting something editorially, I think there are strong growth prospects for the sector.”

But Vizeum press buyer Natalie Rutherford warns that price cuts will only serve to damage the market and will not be the key to maintaining market share in this intensely competitive market.

One buyer suggests that the timing of IPC’s price cut, just weeks before the ABCs, was hardly unexpected, because “as the leading title, What’s on TV will have a lot to lose if rival Bauer were to overtake it”.

But it appears that price-cutting will be a long-term strategy for IPC. Philippa Brown, managing director of IPC tx, the TV weeklies division, says: “Our research shows that the market is becoming increasingly price-sensitive and that we would have been overtaken by Bauer by 2008 if we hadn’t cut the cover price. Also it should be taken into account that unlike TV Choice, What’s on TV has been consistently putting up its price and still maintaining market leadership.”

Bauer launched TV Choice in August 1999, priced at 35p. Publishing director for TV titles Julie Lavington says the cover price of TV Choice would not have been cut if IPC had not initiated the move. “The unique selling-point of TV Choice is its low cover price, and therefore we had to respond to IPC and drop the price from 40p to 30p. It is not a knee-jerk reaction and we would not have done this in an ideal world.”

Both publishers say that there will be no change to their aggressive marketing techniques in the long term. But Brown’s intentions are clear: she says that it is not Bauer’s “right” to be the cheapest in the market.

As well as What’s on TV, IPC also publishes TV &amp; Satellite Week, Soaplife and the TV Times, which is priced at the troubled premium end of the market and is up against the Radio Times. Both the Radio Times and the TV Times have experienced significant year-on-year and period-on-period declines in circulation.

BBC head of circulation Paul Owen puts this decline down to a move towards budget-priced titles. He adds: “Supporting permanent price-cutting does not make commercial sense for publishers, and it also removes any category growth.”

New launches, he says, will also put pressure on a market where people do not tend to make dual or repertoire purchases. Instead, any launches will only serve to cannibalise existing titles’ sales.

Goodman says: “The Radio Times sits apart from other titles because of its brand heritage and it might be losing some fickle readers to mass-market magazines. But low-priced TV listings are bought primarily during weekly supermarket shopping trips, while the Radio Times is bought for its editorial quality.”

He believes there is scope for a new type of TV listings title along the lines of the US-style listings booklets, which are heavily focused on editorial quality.

Starcom MediaVest press buyer Ian Tournes says that Trinity Mirror, led by Bailey (who was head of IPC’s listings division before becoming chief executive), might just be best placed to launch such a title. He says: “With newspaper circulations declining rapidly, Trinity needs to go to the City with some big news to try to maintain confidence in the newspaper group. A newsstand launch may well do the trick. Rival Richard Desmond’s imminent newsstand launch of women’s magazine Happy will be another trigger for Bailey to try something similar.”

According to industry speculation, Phil Hall, editorial development director for the Mirror Group Newspaper’s national newspaper supplements and a former editor of the News of the World, is thought to be heading the launch project. Trinity Mirror refuses to comment on “any speculation about future business plans”.

With the industry rife with talk of launches and sparring over price, the fight for a greater share of the TV listings market is likely to be compulsive viewing for some time to come.