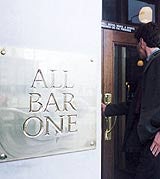 The pub trade is gearing up for an unprecedented boom in late night venues as the UK prepares to scrap its arcane licensing laws and embrace “continental” bar culture.

The new regime, which promises 24-hour drinking coupled with tough new licensing powers for the police, is unlikely to come into force until 2002, after the next general election. But battle lines are already being drawn in the high street as traditional pub operators vie for supremacy with a new breed of specialist late night venues, such as PoNaNa and Chicago Rock Café, and large-scale “drinking barns”, such as JD Wetherspoon and Yates Brothers.

The only obvious losers, according to industry insiders, will be small, local pubs. The new laws will spell an end to illegal after-hours “lock-ins” – but licensees will find it hard to justify the extra cost of regular late-night opening.

Scottish &amp; Newcastle Retail marketing director Jeremy Blood believes “party” cities – such as Leeds, which already has staggered closing times, and Manchester – offer a glimpse of the future. “Increasingly, cities will separate out into hubs of entertainment and residential areas, as licensing laws become more liberal.

“We are going to see a more continental drinking culture, with city streets buzzing with life into the early hours.

“There will always be a market for good, traditional community pubs but the real growth will be in larger destination venues.”

S&N is expanding its upmarket Bar 38 concept from nine outlets to 21 in the next year, as it gears up for the new regime.

At an average of 4,500 sq ft, each outlet is about three times the size of the average high street pub and is designed to be a ‘chameleon’ bar, changing its use through the day from café/bar to late night music-based venue with stylish design and waitress service.

At the other end of the spectrum, is S&N’s Baja Beach Club concept, which is being tested in Newcastle, prior to a possible nationwide roll-out.

The spiritual heir of the fun pub, Baja Beach is designed to hang on to young drinkers after 11pm by creating a highly-charged party atmosphere.

Staff are encouraged to go into dance routines every 20 minutes to the tune of classic party music such as Michael Jackson and Abba. In contrast to nightclubs, drinks and admission are relatively cheap.

“Baja Beach Club has been extraordinarily successful. It is more drinks oriented than a traditional night club, with about two-thirds of revenue coming from liquor sales and one-third from the door,” says Blood.

Of the other big players, Bass, with its category-leading All Bar One and Edwards brands, looks well-placed to capitalise on the new regulations.

Regional operators, such as Wolverhampton &amp; Dudley’s Pitcher and Piano chain and Fuller’s Fine Line chain and independents such as Pitcher &amp; Piano, also look in good shape to benefit, according to analysts.

But they, like everyone else in the trade, will be keeping a close eye on specialist late night operators such as Chorion, which runs the phenomenally successful Tiger Tiger bar in London’s Haymarket.

The company’s nightclub division achieved a 151 per cent increase in pre-tax profits, to &£5.2m, earlier this year, and it aims to open between 12 and 15 Tiger Tiger venues around the country in the next two years.

PoNaNa, a 44-strong chain of late night North African-themed bars, is also in expansionist mood, despite the fact that its business, in England at least, has been built on soon-to-be-obsolete late licenses.

Its two Scottish bars, where licensing laws have already been liberalised, are among its most successful and it is confident it has a winning formula – even if it has to open even later than it does now to retain a competitive edge.

Tim Andrews, group finance director, says: “Our market is almost exclusively young people so you have to keep it fresh. It is no good just opening a barn which serves late drinks.”

He adds: “Branding is important because we have a mobile customer base. A large proportion of our customers are students, who move around the country.

But there is a lot more to branding than decor or music policy. It is about quality of service. Young customers are more demanding than ever. That’s why bigger operators, such as ourselves, will win out over the independents because we have the scale to train our staff properly and sort out the food and the door security.”

The other losers in the licensing shake-up are likely to be small independent nightclubs, which are often the only places that serve alcoholic drinks after 11pm.

The sector is likely to become increasingly brand oriented as operators battle to offer something distinctive.

Luminar, which operates 100 bar and nightclub venues mostly under the Chicago Rock Café brand, is currently in the throes of a &£422m take-over of Britain’s biggest disco operator Northern Leisure, which operates largely unbranded venues. A spokesman says: “Home entertainment is becoming increasingly accessible and sophisticated.

“People will have to have a good reason for going out to get their entertainment. Venues that ensure you will be entertained in a fun and safe environment will be the winners as options become wider.

“Our reputation will be won or lost on our ability to offer venues which entertain customers and are great meeting places.”

Bar operators are increasingly holding auditions for staff – rather than interviews – as the pressure to entertain grows.

But the key to the success in Britain’s new bar culture will, as many in the industry privately admit, be increased overall consumption of alcohol, particularly in the all-important 18- to 24-year-old market.

The days of binge drinking to meet an 11pm deadline may be on the way out but, for mainstream pub operators at least, the only way to pay for longer opening will be increased sales.