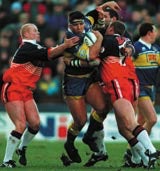 William Hill and Puma are the latest brands to sign up as sponsors of the Rugby Football League. They join NestlÃ© Rowntree’s Lion bar and Interbrew’s Castlemaine XXXX, which became the first RFL sponsors last month (MW July 14).

Branding from the bookmaker and the sportswear manufacturer will feature at all Super League matches for the rest of the season, including the forthcoming play-off series, the Powergen Cup Final and the Tri-Nations tournament in the autumn.

Puma becomes the official merchandising partner of the RFL as part of the six- figure four-year deal. It will supply the new Great Britain kit for the Tri-Nations competition, as well as kit for match officials.

Puma takes over from Australian shirt manufacturer Classic. William Hill has signed a one-year deal with the RFL. Marketing manager David Lynn says: “The partnership underlines our commitment to the game and is the ideal platform to promote our range of betting products.”

The deals with NestlÃ© and Interbrew were the first of their kind for the RFL, although Engage Mutual is the title sponsor of the Super League; Powergen sponsors the Challenge Cup and Gillette sponsors the Great Britain team and the Tri-Nations tournament.

Last year, the RFL negotiated contract renewals with both Sky Sports and the BBC. Viewing figures were up 40 per cent for games screened this season.