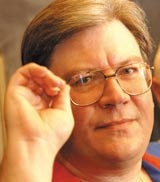 There’s something about darts, isn’t there? A sport for real men, as opposed to those &£90,000-a-week prima donnas that roll around on the floor in agony when an old lady brushes past them in the supermarket. The great British public can clasp the Andy Fordhams of this world to its bosom much more easily than it can the David Beckhams.

This is because darts is one of the few sports not to have lost touch with its working class roots, a point not lost on pub owner Punch Taverns, which is sponsoring the comeback of Eighties champion arrow-chucker Dave Whitcombe. Whitcombe is the landlord of the Gore Court Arms pub in Sittingbourne, one of Punch Taverns’ 7,800 UK boozers, and with his employer’s support he reckons he can make it back into the world top 20 players.

Whitcombe intends to continue running his pub while making his comeback, which will come in handy – after all, no darts training session is complete without a few pints to “steady the arm”.