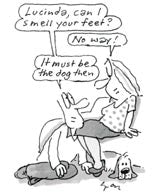 Italian inventor Mario Moretti Polegato claims he has solved the problem of smelly feet. But is Britain image-conscious enough to care? Iain Murray has his doubts

Having recently returned from a beach holiday, during which I sat in the shade, respectably clothed, and watched the world go by, I was reminded, as always on such brief sojourns in the sun, of the gulf that lies between the Attic ideal of bodily beauty and the naked reality.

It is with a sense of relief that one returns to northern climes, where the inhabitants are obliged to go around fully clothed for most of the year. That we have adopted an American diet and assumed the physical proportions and shapes that follow, adds greatly to the desirability of aesthetic swaddling.

This in turn gives rise to a mystery: the undeniable truth of the adage that sex sells: that naked women, and to a lesser extent men, are proven sales aids. This must be explained either by mass self-delusion – the notion that the buyer in some way resembles the golden models in the ads, or, by acquiring the product, the buyer might take on some of their more alluring aspects – or, more likely, mass fantasising.

Either way, it is almost an act of cruelty to let cold light fall upon a myth and speak of things as they truly are. It is doubly shocking when the speaker hails from the land of smooth talking, pomaded Latin lovers whose worship of women is legendary. And yet in London last week was a man who dared to tell the world, out loud, that women’s feet smell. True, he granted that men’s feet smell too, but that was scarcely controversial. It is, after all, an established post-feminist fact that men are in most respects useless and, by implication, unsavoury to the point of malodour. But women? There is an old saw to the effect that horses sweat and men perspire but women glow. And glow is odour free.

Here, however, was a man who denied this truth. The heretic spoke his blasphemy in the business pages of The Daily Telegraph. The article began: “‘I am not a shoemaker, I’m a missionary,’ declares Mario Moretti Polegato, leaning back in his chair with an Italian grin across his face.” An Italian grin is not like a French kiss or German measles. It derives its name by virtue of its maker being Italian. And it’s across his face because that’s where Italians wear their grins.

“The bad smell is for everybody,” he continues. “Most people think it is their fault, and it is very embarrassing for the ladies. But this is a new era, there does not exist another technology this big.”

In other words, everybody’s feet smell – yes, the ladies too – but he has the answer. He is the inventor of a carbon-based filter called Geox, which, when inserted into the sole of a shoe, allows the sweat to go out but prevents water from getting in. It will, he claims, transform our world. Some dream of a world without poverty, others of a world without hunger. Polegato’s vision is of a world without smelly feet, a world that will take us a step nearer to attaining the Greek ideal of bodily perfection that seems so elusive, especially on the Underground on a hot day.

Like many inventors, Polegato made his discovery almost by chance. While out jogging he became increasingly dismayed by the hotness of his feet. Though some may mock the Italians and claim they are not men of action, Polegato defies this reputation. He seized the moment and cut a hole in each of his trainers. The effect was so gratifying that he became obsessed by shoes, sweat, smell and related matters. Now he covers the world, jetting hither and yon in a mission to rid the planet of one of the besetting problems of what it is to be human, namely to have sweat glands where ideally sweat glands ought not to be and, perforce, to live with the consequences.

His marketing is idiosyncratic. Like a Catholic missionary he believes in catching them young and has devised a comic book for children called Magic Geox. It tells the story of how, with the right footwear, you can beat a slimy character, imaginatively called Accumulated Sweat. The book’s hero, modelled on Polegato himself, discovers Geox, not when out jogging, but with the help of a hedgehog called Prickles, and embarks on a “long interplanetary journey to show my invention to whomever needs it.”

Which, if nothing else, shows yet again that it takes all sorts to make a world. I do not wish to be any more cynical than I usually am, but I cannot help feeling that Signoré Polegato’s mission will enjoy partial success at best. You do not have to go all the way to a Caribbean beach to confirm that a great many people are not only happy with their bodily imperfections but are eager to parade them. Venus and Adonis may not have had sweaty feet, but many modern Brits do, and if you don’t like it, too bad.

Then again, is the problem really that severe? Remember, it was jogging that prompted Polegato’s invention. Had he been walking, his feet would have stayed cooler. Forget Geox, there is an older answer to body odours. It’s called soap and water.

The Diary is tired of speech and script. The same two ways of communicating have had to serve since the abandonment of the caterwaul. And serve they have – the Diary’s abode would be a bare one indeed without the cash they have brought in. But there comes a time in life when change is […]

I note that David Bodmer (MW March 13) felt aggrieved by Iain Murray’s article on recruitment companies. Truth does get that response. As a mature jobseeker, I thought it was very accurate. Bodmer should reflect that individuals treated with disdain by recruitment consultants (no replies/lack of information/hidden job descriptions) will end up as the hand […]

The Whitbread Hotel Company has appointed Tony Dangerfield to the newly created post of commercial director of Marriott Hotels, in a restructure of the chain’s marketing team. He joins Marriott from his position as managing director of Thistle Hotels’ managed hotels division. Dangerfield effectively replaces sales and marketing director Guy Parsons, who was promoted to […]