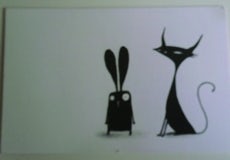 I received a business card in the post today with the web address Pussyandrabbit.com in nice swirly pink font and a rather cute illustration of an alarmed looking bunny and a sleek feline on the other side. Intriguing.

However, due to it arriving the same day as, and with the same postmark as, an invite to Ann Summers’ relaunch party next week it doesn’t take a rocket scientist to figure out that Pussyandrabbit.com (think Rampant Rabbit) and the invite are connected.

It’s a bit of a shame that it only takes you to a blank site saying “website coming soon” but I think it’s fair to say that the cheeky lingerie retailer is about to announce something new.

A new sub-brand perhaps? A new range? A new direction?

A cute teaser campaign from Ann Summers. Intrigued to find out what’s in store.