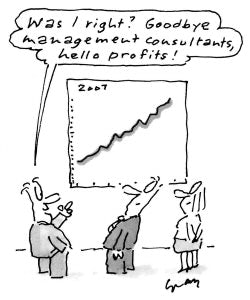 This is the time of the year for giving up things. And, in the spirit of the age, the giving is selfish. The things we give up, or at any rate resolve to give up, all concern ourselves. Time to give up the gaspers, we tell ourselves, and perhaps the booze, and, since obesity is soon to become a crime, doughnuts.

It does not occur to us to give up things that would make life more endurable for others. Who ever heard of anyone resolving not to use a mobile phone on public transport, or eat smelly food, ditto? How many people see a New Year as an opportunity to stop saying “No way”, or “That is so-oo not to my liking” or “How uncool is that?” or that other Americanism “arseome”.

Ideally, the giving up of things should benefit all. In one of those happy paradoxes, the subtraction should add to our wellbeing. With that in mind here are a few things that could easily be given up and which would by their absence make life, if not a little happier, a whole lot less irritating.

Management consultants. Charlatanry is rightly despised in the medical and other noble professions, but here is an alleged service built upon nothing but the false claim to special knowledge or skill. When a public company calls in management consultants it is an admission of failure. When a government department calls them in, it is a drain on the public purse. Since Labour came to power it has spent £70bn on consultants, almost all wasted. As David Craig, a management consultant turned whistle-blower, explains: “We can take somebody straight off the street, teach them a few simple tricks in a couple of hours and easily charge them out to our clients for more than £7,000 a week.”

Human Resources. When, quite without warning, personnel managers disappeared behind a screen and came out the other side transformed into HR, a bogus science was born. Employers were persuaded that psychometric testing, graphology, role playing and other tricks straight out of a witch doctor’s bag of bones, were able to remove the uncertainty of recruitment. In truth, another costly and useless layer of management was created.

The Department of Trade and Industry. Since all industrial and trading policy of any significance is decided in Brussels, this ministry performs no useful role other than to meddle in business and preside over the generation of red tape.

The Department for Culture, Media and Sport. Would anyone, apart from the people employed by this carbuncle on the body politic, notice if it were to disappear tomorrow? It was created by John Major as a “Ministry of Fun” to provide a job for David Mellor. The joke, never a good one, is now over.

The BBC. Once a much-loved British institution, it has become an arrogant, greedy, wasteful monster that no longer serves the purpose for which it was created – that is, to provide a quality of broadcasting unavailable from any other source. Moreover, its £3bn a year raised from every household under pain of imprisonment keeps it immune from market pressures and allows it to compete unfairly with commercial rivals.

Quangos, the whole damn lot of them. These now cost £123bn a year and, as with the Ministry of Fun, could be swept aside without anyone noticing the difference. Who, for instance, would mourn the passing of the Music and Dance Scheme Advisory Group, the Public Diplomacy Board, or the Disruptive Passengers Working Group?Public Relations. That this industry provides employment for many of the prettiest and best-educated young women in the country, should not blind us to its essential superfluity or its capacity to get in the way of truth and understanding. The gorgeous girls in PR should be redeployed as bus conductresses, in which capacity they would not only restore to daily life a much missed occupation, but also add a glamour lacking in public transport.

Public opinion pollsters. These, of course, should be given up on the grounds they are dispensable fountains of trivia. However, like tobacco, alcohol, John Prescott and other poisons, they add to life a merriment, which, though not harmless, is irresistible.

These, then, are a few of the things we could give up and, in so doing, add to the commonweal. In filling our dustbin we would especially benefit the taxpayer and those endeavouring to create wealth in the overburdened private sector of the economy. True, there are many other things we could do without – media studies, the layers of local government between town clerk and road sweeper, Anne Robinson, gastropubs, personal injury lawyers – but, God willing, there will be other years, and other dustbins. •

Sony Ericsson is planning to boost the appeal of its range of Walkman music products with the launch of an entry-level phone handset that holds just 37 songs.

Vision Express, the UK optician chain is understood to have approached ad agencies to pitch for its £7m advertising account. Several agencies have received an e-mail from the retailer expressing interest in appointing and retaining a single agency – previously the Vision Express creative account was handled on a project basis. In May last year […]

Esure’s two-year row with Direct Line over the trademarking of a computer mouse on wheels looks set to rumble on after Esure vowed to fight a ruling that came down in favour of its rival. The Trade Mark Registry last month backed Direct Line’s objection to Esure’s trademark application for the mouse on wheels, but […]