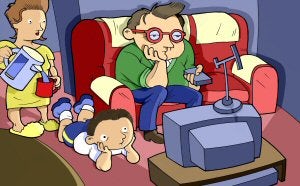 For years, there have been predictions that television advertising would be destroyed by the PVRs, which offer viewers the ability to skip quickly through television ads.

But new research by Sky, leaked to Marketing Week, demonstrates that PVR users watch more ads, not fewer. Figures from the Sky View panel of 20,000 homes, including 3,000 with Sky Plus, the broadcaster’s PVR, show that the total amount of television watched in homes with PVRs is 12% higher than in homes without them. PVR users record some programmes and occasionally fast-forward through ads. But the net result is an increase of 5.4% in the amount of television advertising they watch.

Along with the fact that after five years, only one in ten homes has a PVR, and it seems the threat from television advertising’s nemesis has been overplayed.

But the fragmentation of media outlets, with people spending more time online, watching television clips on mobile phones and choosing from hundreds of TV channels, is undermining the traditional “interruption” model of TV advertising.

Whether PVRs damage ad viewing or not, the new digital environment means advertisers have to use ever more ingenious methods of appealing to viewers.

The most important challenge in the “attention economy” will be to grab people’s interest. Mick Rigby, joint managing partner at creative communications agency Monkey, says: “The canny advertisers have to embrace a communication strategy of engagement. Interactivity on digital TV, SMS texting and directional ads to websites are all new ways of inviting the viewer to engage.” He gives the example of an ad Monkey created for dating site Match.com.

‘Live’ Advertising
The campaign offered one male and one female Match.com member the chance to appear live on ITV to make their pitch for a date. The brand booked three ad breaks in an episode of Love Island. The ads were shot just before transmission, in front of a live studio audience, and then transmitted “as live”. In the first, the host introduced the winners, in the second, the man made his pitch, and the third was the winning woman’s turn.

The company claims it led to the highest month of new subscriptions in the website’s history. This was an example of a new media outlet using traditional television in an innovative way.

The use of TV to direct people to websites is buoying up both areas of marketing spend, according to Tess Alps, chief executive of commercial television’s promotional body Thinkbox.

“Television advertising budgets have gone down and there is no escaping that. It appears to be causally related to internet spending going up, but there are not that many brands which have taken money out of television to support the internet,” she says.

But even some of the ad agencies most closely associated with 30-second television ads acknowledge that the world is changing. Elliot Moss, managing director of Leagas Delaney, often seen as wedded to traditional ad campaigns, says: “Even Leagas Delaney acknowledges television isn’t what it was even five years ago.”

He points to the campaign it created for Reebok that uses a poster campaign featuring sports stars to direct people to the rbk.com website. “Rbk.com can’t reach its audience by spending £2m on 30-second slots on Channel 4 so the strategy is attracting people to the website. You need to entice people to come to you with a promise they can’t get in mainstream media,” he says.

But some believe television will continue to be the primary method of delivering brand messages for some time to come.

Andrew McIntosh, research director of IDS, Flextech’s advertising sales house for digital channels, says: “The commercial television sector has never been healthier, the number of ads seen is higher than it has ever been.” Research based on BARB figures shows that the total impacts from 30-second television ads has increased from 500 million in 1997 to an estimated 700 million in 2006. He believes viewers are looking to be entertained and are willing to allow enjoyable ads to interrupt their viewing. He says that brands must use television cleverly.

Veet brand manager Esther O’Reilly was impressed with the results. “Queer Eye was the ideal platform to generate awareness of the Veet depilatories and to reinforce its sexy and modern values. It gave us access to the right female hair-removing viewer as well as the right number.”

It is clear that television still offers plenty of opportunities for creative uses of the medium beyond 30-second commercials. That said, the imminent arrival of Internet Protocol Television and greater use of TV on mobile phones cannot be ignored: commercial television should start to prepare from some dramatic changes.