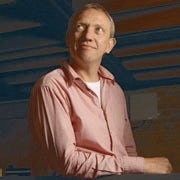 Marketing Week (MW): How are you settling into your new role?

Ashley Stockwell (AS): It’s a big change. I’m really trying to get my head around the business, understand where it’s at, what the issues are, what we need to plan and do over the next two to three years. It’s a tiny business compared with Virgin, and that’s great in terms of just having a small team to work with.

MW: How does the business work?

AS: There are several sides. There’s the manufacturing side, of which the water is part, and we bottle our own water in the UK. We manage all of that, from sourcing it from the spring in Wales, to designing the packaging, doing all the marketing and managing all the trade sales and retail support.

Aside from that, we have license partners, of which eggs is the most recent one – we work very closely with Noble Foods on that. They pay us a royalty fee and a donation to cover it. We work with them on the brand positioning and packaging but they manage the marketing and retail sales, with us acting as a brand guardian.

We have another part of the business that deals with food service providers that have service contracts with corporate offices, universities, and places like that, where One Water is stocked in the canteen.

MW: What exactly does your role cover?

AS: Everything from sales to brand, marketing and licensing across all our territories. The structure of the business runs down from Duncan Goose, who is the managing director in an entrepreneur/leader/owner sort of role. We have a small sales team and they work with our existing retail partners and stretch out our distribution. Plus there is a small team of marketing people who help build on our plans.

Before I joined there were people doing bits of it. Duncan was running the show pretty single handedly and part of my role is allowing him space to help build the One Foundation. People were previously doing some marketing and licensing, and now I can pull all that together and be really clear on roles and responsibilities and setting goals and targets so everybody is heading in the same direction.

MW: What are your main priorities at the moment?

AS: There are lots of things to get on with, such as building a long-term marketing plan. At the moment it’s sort of six months by six months and what we want to build is an 18-month to two-year plan. You need to build that, particularly in terms of working with retailers and the long lead times they have.

MW: How are you increasing brand awareness?

AS: There is a campaign currently running that is primarily on TV and radio. We produced a series of ads that are quite flexible; some talk about the range of products and some talk about a specific product like eggs or water. We’ve run the 30-second TV ad on about 60 spots. We also have a radio campaign running nationwide that is targeted primarily at daytime shoppers, such as mums listening to the radio in the car while dropping the kids off at school.

MW: How has your retail strategy progressed so far?

AS: We’ve made a good start with retail partnerships. We have distribution in Morrisons, The Co-operative, Tesco, Sainsbury’s, Waitrose, Asda and Ocado. Some take a number of products, some take all. The short-term focus is to work on those existing relationships and work on building the product ranges that they stock but also increase their rate of sale. As people buy more, we get more shelf space and so on.

MW: Is it difficult to convince consumers to pay a premium for One products?

AS: Price-wise, we position ourselves at or just under the brand leader. This isn’t cheap own brand, this is a quality product. The challenge for us and the retailer is to negotiate a decent price so we can make some money. If we don’t make any money we can’t give any away.

MW: You already sell products such as water, toilet tissue, handwash and condoms. What others do you plan to launch?

AS: We will be launching new products but we need to have the resource and capability to do that effectively. We have plenty to do at the moment with the products and retailers we have on board now but we have got things in the pipeline for the next 18 months that do involve launching new products. But the ultimate aim is not to have, say, 20 products by the end of the year. The aim is to get more net profit that we can give away, which is about building distribution and brand awareness.