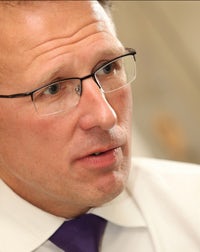 Q&A with Andrew Mullins, MD of The Evening Standard, The Independent and i newspapers.

Marketing Week (MW): You head up both The Independent and The Evening Standard so how do you manage both businesses?

Andrew Mullins (AM): I have operations, digital, advertising sales, sales and marketing and finance directors who all report to me, and we run the two businesses together. The editors of our titles report directly to the owners, although we work in tandem with them.

I report to Evgeny Lebedev, the chairman of The Evening Standard and The Independent. His father Alexander Lebedev is the owner but the son runs the businesses. If the ship’s going in the right direction they let us get on with it, but if it’s going slightly off they like to know what’s going on. They don’t tend to be heavy handed; they trust us to run the business.

MW: What has it been like working with the Lebedevs since they bought The Independent this year and The Evening Standard last year?

AM: Alexander and Evgeny have other businesses to run and this is a very small part of their portfolio but they are very passionate and committed. They 100% expect their management team to know what’s happening. Through board presentations and meetings we talk about strategic options and their financial implications. If it’s a bad idea they redirect us, then we make a decision and move forward.

MW: Do you foresee i having any political allegiance?

AM: The Independent has no political allegiances, and therefore i definitely won’t. Just because newspapers back parties in elections doesn’t mean they have political allegiances – it means that ultimately, on the day of the election, they make a call based on the evidence. Coming out on the day of the election and saying: “Given everything that we know, this is who we think will win” is taking an opinion, a stance. The Evening Standard did that this year [backing The Conservatives]. Others come out and back a particular party early on, and we wouldn’t do that.

MW: Has moving The Evening Standard from 50p per issue to a free model been a successful strategy?

AM: It’s doing amazingly well. Most people thought that we were finished and dead and the one thing they didn’t expect us to do was go free and keep the quality of the paper.

Now 700,000 copies are distributed every night and Londoners see The Evening Standard as an essential part of their daily commute home.

Past negativities are dropping away and people are seeing it as celebrating London.

We initially began distributing 600,000 copies because you don’t want lots of copies lying around at the end of the night. But they were going faster and faster every night so we added another 100,000. Hopefully advertisers will continue to support that because it’s a good audience and people are reading. We are still confident in the model.

MW: How has your marketing background at Unilever and Diageo helped shape how you do business today?

AM: When you come as a marketing person into a newspaper, people expect you to be a promotions manager. The key thing is for you to find a way to get yourself involved in the strategic agenda. If you can, you can then talk long-term about consumers, whether you are meeting needs, and how people want to read news and what they want from it – and you can influence that agenda.

In most businesses, you talk about how you can get marketers on the board to make companies more consumer focused. In newspapers it’s slightly different because the real, unofficial marketing directors are the editors. They are the people who have a feel for who the audience is and they craft the product on a daily basis.

The editors and I work hand-in-hand as a partnership to build our businesses, and they don’t think that they have the sole knowledge in their area, as I don’t on the commercial side.

MW: What led you to move from consumer goods into media?

AM: The journey was shaped by personal circumstances. When I was at Diageo I developed pancreatitis, and I’m not allowed to drink alcohol ever again. I was working in Europe at the time and it was likely that my next move was going to be the Far East, and that didn’t make sense for me personally.

So I went back to the UK to look at different options. The options that were available to me at the time were in telecoms or media. I chose media, so it was more that I fell into this than any strategic journey.

Current role: Managing director of The Evening Standard, The Independent and i.

1995–2001: Various roles at Diageo, including managing director of UDV Amsterdam.

October 2009: The Evening Standard drops its 50p cover price and relaunches under a new free distribution model, doubling its circulation to attract sufficient advertising revenue. This is less than two months after the closure of thelondonpaper and London Lite freesheets, owned by News International and Associated Newspapers respectively.

October 2010: New title i launches as a brand extension of The Independent, designed as a condensed quality read for busy people, priced at 20p.

We launched i yesterday, so I spent a lot of that day doing media interviews. Typically though, I spend my time running the business from the inside. My two heads of advertising, Jon O’Donnell and Melanie Danks, do all the hard work getting the money in from media agencies and clients.

I talk regularly to the editorial and commercial teams, making sure the strategy is being developed, setting the right KPIs and measurements and making sure we are delivering against them.

If we’re on target it’s about making people know they are doing a bloody good job, and if not, it’s about how can we rectify the situation. I also have weekly meetings with our chairman, Evgeny Lebedev [who is the son of owner Alexander Lebedev].