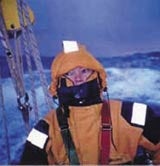 The Qatar deal will include the creation of a non-stop global race in January 2005 called the Oryx Cup, which will start from the UK and end in Qatar. The race will carry a cash prize of over £600,000, with extra money for any boat that breaks the Jules Verne Trophy record for the fastest time.

The second race – the Qatar Sports Global Challenge – will start from Qatar in December 2006, with stopovers planned in the Far East and the Americas.

Edwards will rebrand her boat – the Maiden II – as the Qatar 2006 and will attempt to break the Jules Verne record this winter. She is still looking for two other sponsors.

Qatar has sponsored the sport in order to increase its exposure on the international stage. It is hoped that the deal will boost the state’s profile as a place to do business, as well as a tourist destination.

Edwards has broken a number of records with her all-female crewed boat, which has been sponsored by Royal &amp; SunAlliance in the past. She says the deal will help Qatar attract new visitors.