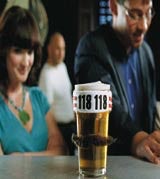 It is understood that an entrepreneur from Asia is behind the service, which is expected to be launched in the next few months.

The company initially drew up a longlist of 20 agencies, which has since been narrowed down to a shortlist of three.

It is thought that the brief told agencies to think along the lines of the campaign for The Number’s 118 118 and that the service will be for consumers and businesses.

It is not yet clear whether QBIS will operate in the same area as traditional directory enquiry services.

According to a National Audit Office report earlier this year, the market is dominated by just two providers – 118 118 and BT’s 118 500 – despite the presence of 30 operators in the market.

Last month, Mark Horgan was named chief executive of The Number. Horgan, who will be based at The Number’s headquarters in Cardiff, was previously retail executive director of MFI.

He replaces Chris Moss, who has been promoted to European chairman at The Number to lead 118 118’s expansion into Italy and France. Horgan takes up his new role in August.

The agencies thought to be involved in the QBIS pitch, and the company itself, were unavailable for comment.