The “Love Mondays FM” special show, set to air next Monday (9 December) between 7am and 10am, will feature celebrity guests and features tailored to promoting how to make the start of the week more healthy.

Quaker Oats, which says the digital radio show is designed to “Invigorate” people on a Monday morning, is running social media promotions to drum up excitement in the build up to the event.

It follows research commissioned by the brand, which revealed one in three (36 per cent) porridge eaters love Monday mornings and see it as a fresh start.

Cindy Tervoort marketing director at Quaker Oats, says: “We’re not arguing with [the research] and want to spread the morning cheer, so we are thrilled to be working with the very talented and funny George and Larry Lamb.”

It will be the first time the father and son duo will co-host a radio program and is being broadcast from DJ George’s home studio.

The show caps off what has been a relatively quiet 12 months for the iconic breakfast brand. It moved into the crowded breakfast biscuit market at the turn of the year alongside launching a campaign to get the nation fit with Mr Motivator.

A 45-minute compilation of the show’s highlights will be available on iTunes following its broadcast. 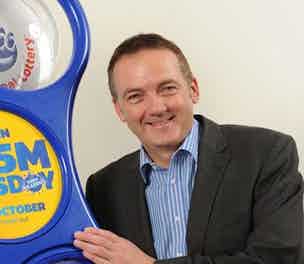