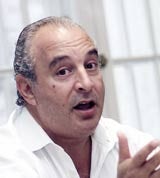 The rules for supermarket takeovers appeared to be relatively clear, if somewhat ill thought-out. Until the chains tried to abide by them, that is. By George Pitcher

It has always been a popular manoeuvre for politicians: if the rules and regulations to which you are subject don’t allow you to do something, you reinterpret them. It’s a ruse, after all, that the governments of the US and the UK have just used to start a war.

It can be employed the other way round, too. Those who actually make the rules and regulations can just as easily change them in order to suit their purpose. The Office of Fair Trading (OFT) has just done this, in order to spare the Competition Commission embarrassment over the proposed takeover bids for supermarket chain Safeway.

I have maintained since the outbreak of hostilities for Safeway that the oven-ready, free-range and corn-fed chickens of the supermarket chiller cabinets were coming home to roost after the Competition Commission’s vapid report on the industry, published in autumn 2000.

Apart from some tinkering at the margins of retail competition issues, the report largely concluded that levels of competition and consumer choice among the major chains were healthy. The difficulty with this was that, when potential bids for Safeway began to emerge two years later, the competition authorities were faced with having to contradict themselves or waving through the prospect of some combined businesses that would self-evidently be counter-competitive.

But a solution was at hand. Rather as UN resolution 1441 has been made to mean anything that hawkish Western leaders have wanted it to mean, the OFT has decided that competition can mean whatever best suits its purposes.

This kind of sophism has about it more than a whiff of Dark Ages theology, when the means of holiness were argued and defined to include or exclude those who suited the church.

Anyway, the effect has been to exclude rival chains – Asda, Tesco, Sainsbury’s and Morrisons – from competing for Safeway, by tying them up with protracted re-examination by the Competition Commission. They might reasonably have believed that their proposals met competition criteria, as defined by the commission in 2000.

It is said that Sainsbury’s was expecting to have to dispose of 90 stores if it was successful in its offer to Safeway’s shareholders. Under the revised definition of a competitive market, Sainsbury’s would be required to shed twice as many stores.

By the same competitive token, Morrisons was expecting to have to sell or close only a “handful” of stores, given its relatively limited geographical spread. That handful turns out to be more of an armful under the new rules, amounting to about 30 stores.

It remains to be seen how many of the predators continue to consider it worth their while to pursue Safeway, when the OFT might decide at any moment that the number of car-parking spaces is a critical criterion, or the number of consonants in a brand name.

I note that Competition Commission chairman Derek Morris is overseeing the Safeway issue. He also presided over the 2000 inquiry. It will be fascinating to discover how he defines healthy competition as the Safeway inquiry unfolds.

One consequence of the regulators making competition a moving target is that they appear to have cleared the way for Philip Green, the shopkeeper who so spectacularly turned round Bhs and who, without the embarrassment of being a grocer, finds himself as the only potential bidder not to be referred to the commission.

Green is now widely expected to bide his time, of which he is now blessed with plenty – one aspect of competition policy the OFT has not changed is that inquiries take an age. With a Safeway trading statement expected next month and some volatility taken out of the equity markets if the war in Iraq is completed quickly, Green will be anxious not to overpay.

Rather sadly, Green also has a little work to do to rehabilitate his image after a spectacularly entertaining run-in with The Guardian. I say it’s sad, because there are precious few top business people who can lead off with expletives undeleted at the national press, or anyone else who displeases them.

As the world braced itself for war, The Guardian splashed its front page with the Green story. Abusing people for their ethnic background (for which Green has apologised) is never edifying and some of those at The Guardian are friends of mine. But the spat is symptomatic of an inalienable truth.

Green is immensely rich and powerful and his business interests are private – in the sense that his companies aren’t publicly listed – so he doesn’t have institutional shareholders to upset.

The vacillating Competition Commission has cleared the way for this man. We’ll see, as Green proceeds – and as he speaks his mind – whether this was quite what Morris and his colleagues had in mind.