The UK attractions sector is having to fight harder to win share of voice, consumer time and wallet. As a result, it is increasingly using the full range of the marketing mix to attract new consumers, maximise repeat visits and build brands. But are some channels more effective than others?

With over 7,000 museums and galleries, historic properties, theme parks, gardens, zoos and places of worship, attractions are at the heart of the UK tourism industry. Competition has intensified with an ever-growing repertoire of products, exhibitions and events offered to potential visitors – think Chinese warriors versus Egyptian pharaohs – while Lottery funding has stimulated the development of new attractions and refurbishment of existing ones.

Arguably, the London Eye’s innovative design and unique offering – it is the world’s tallest observation wheel and offers unrivalled views of London – ensures it maintains its competitive position.

In the latest Business Development Research Consultants (BDRC) Attractions Marketing Tracker, a quarterly online survey of 1,000 consumers at attractions in London and the South-east, the London Eye ranks second in the list of visitor attractions that people actually choose to visit.

Attractions are innovating, trying to capture parts of the market interested in specific experiences, such as Thorpe Park’s Stealth – Europe’s fastest rollercoaster. Others are maintaining and improving their competitive position by refreshing what is on offer. The best examples of this can be found in museums and galleries. This sector has been responsible for driving increases in the overall market since 2001.

A primary factor has been a Government initiative allowing free admission to designated national museums and galleries across the UK that was introduced in 2001 to encourage a more diverse visitor mix.

Between 2000 and 2004 museums and galleries recorded a 16% increase in visits, compared with 4% among historic properties and 11% for the overall market, according to Visit-Britain’s 2004 Survey of Visits to Visitor Attractions.

Interest in free museums remains high. BDRC research shows the Natural History Museum, Science Museum and British Museum ranking first, second and third respectively (in terms of level of interest in visiting) from a list of 24 attractions in London and the South-east.

Furthermore, about 40% of the respondents interviewed had visited the Science Museum and the Natural History Museum in the past five years, and 34% had been to the British Museum, demonstrating the high and broad level of appeal of these destinations.

Free admission – and with it risk-averse consumers who are more likely to be deterred from paying to visit places about which they know little – has driven this.

However, many of the UK’s largest museums and galleries have also been refreshing their offering to an extent that competing sectors have yet to achieve. In many cases this does not involve a change to permanent collections, rather an evolving programme of special exhibitions and events. The British Museum has seen interest significantly increase with its Terracotta Army exhibition. The museum has jumped from 30th place in the first of two surveys carried out this year to seventh place in the second survey.

BDRC data shows television or radio advertising is cited the most by respondents (19%) in terms of how people hear about attractions. Word of mouth recommendation (17%), leaflets (16%), programmes on TV or radio (15%), articles in newspapers or magazines (13%), advertising on posters at a train or underground station (12%) and an attraction’s own website (11%) are also widely cited. However, analysing these media in terms of their impact on the visit decision reveals media that promote awareness of attractions are not necessarily those that drive actual visits.

The survey shows the top three media in terms of impacting on the final visit decision are word of mouth, exhibitions or other events and the attraction’s own website.

Awareness is crucial for attractions to remain top-of-mind, but it is the supporting information about the attraction and the experiences it offers that is crucial to the final visit decision. They need to achieve this balance – “I know of it but I don’t know much about it” – is not enough in this fiercely competitive market. 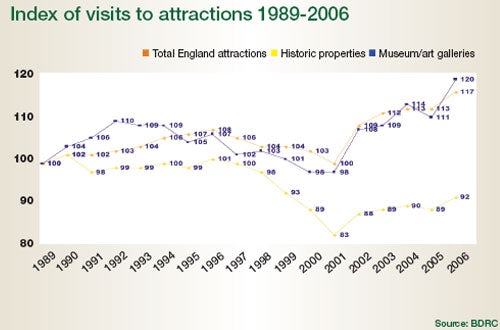 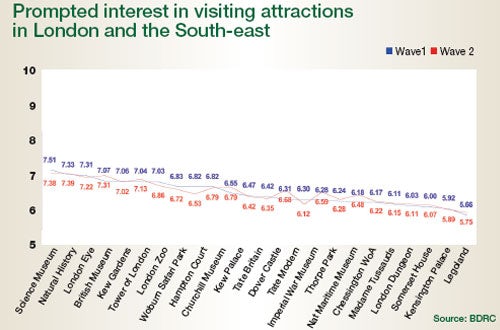 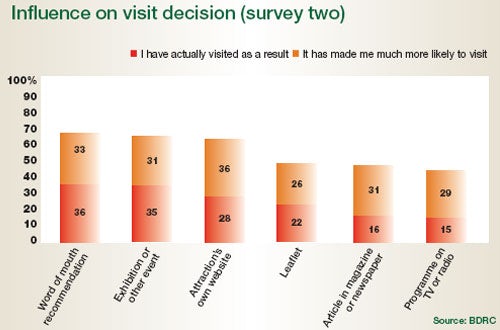