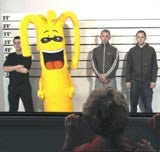 Golden Vale has appointed Quiet Storm to handle the £4m advertising business for its Cheestrings brand.

The move comes just four months after the Irish company appointed BDH/TBWA to the business, and the Manchester-based agency is understood to have pitched against Quiet Storm.

The TV campaign, which breaks later this month, will focus on a promotion with Sony, offering the chance to win Sony products, including Walkmans and video cameras. In line with the BDH work, the ads will continue to use the Mr String character as the brand mascot. The work is Quiet Storm’s fourth new piece of business this year, following wins on PlayboyTV, EMAP Elan’s Bliss (MW March 23) and Golden Wonder.

Golden Vale launched Cheestrings in 1996. It has four variants, Cheddar, Twister, Smoky Bacon and Pizza. The cheese snack category is worth £90m.

In February, Golden Vale announced plans to broaden the brand’s appeal in an effort to appeal to younger teenagers. As well as advertising by BDH, the company ran a national sampling campaign and redesigned the packaging.