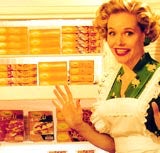 Fears raised by scientists last week that BSE can jump from cows to sheep, pigs and poultry without visible symptoms are likely to drive more consumers towards vegetarianism. And not only in the UK.

Marlow Foods, owner of meat substitute Quorn, is planning a bold foray into the US (MW August 31) and hopes to persuade Americans to bin their burgers and switch to the vegetarian brand.

The estimated figure of £399m for 1999 – including £233m for ready meals – rose from £328m, including £178m for ready meals, in 1997 (Mintel). But if its UK success is to be repeated in the US, food industry observers believe Marlow may have to strike a deal with a major food rival to improve distribution.

Marlow is awaiting approval from the US Food &amp; Drug Administration to launch Quorn frozen meals in the US, where the meat-free sector is worth $270m (£185m). Rivals include Kellogg-owned Morningstar Farms and Kraft’s Bocaburger.

Quorn first appeared in the UK in 1985. Marlow Foods, previously a joint venture between ICI and RHM and now a wholly-owned subsidiary of AstraZeneca, says sales have exploded from £3m in 1993 to current sales of £100m.

Quorn – also available in Belgium, Switzerland, Sweden, the Netherlands and the Republic of Ireland, with plans for launches elsewhere – is marketed as a low-fat source of fibre and protein. The range includes chunks, mince, burgers, sausages, fillets, patÃ© and escalopes.

The recent developments in the BSE crisis may persuade even more people to give up meat, despite Government claims that there is no further threat to humans. A Gallup poll showed that while the number of vegetarians rose from 2.1 per cent in 1984 to 5.4 per cent in 1997, the figure dropped to five per cent in 1999. But the Vegetarian Society, which has accredited Quorn as a vegetarian food, says the figure is likely to rise again in the wake of the latest BSE scare.

A 1998 survey for the charity found 25 per cent of people still think meat is unhealthy, while 82 per cent think the number of vegetarians will increase.

Despite the thriving UK meat-free market, Marlow faces a battle to fill stomachs across the Atlantic, where the trend seems to be against vegetarianism. In 1992, almost seven per cent of the US population claimed to be vegetarian in a poll by Roper on behalf of the Vegetarian Resource Group. But in 1997, only one per cent were labelled true vegetarians.

But the Vegetarian Society’s head of public affairs, Samantha Calvert, points out: “The percentage of vegetarians is higher in the UK than the US, yet there are thriving vegetarian communities in the States.

“People are health-conscious in the US and Quorn may be bought as a good alternative to meat. A lot of meat substitutes are aimed at people who are not vegetarians.”

Observers say Marlow’s decision comes as the UK’s fad for vegetarian and organic food reaches a peak. The only way for Quorn to grow is by entering new markets. One City analyst warns: “Marlow is not a big player and distribution is going to be difficult. The company may get swallowed up or seek a joint venture to aid distribution channels.”

Unilever would be an obvious contender for a takeover. It recently acquired US food group Bestfoods and Quorn could fit into its Birds Eye Wall’s frozen meals division or Van den Bergh Foods. No one at Unilever was available for comment.

Marlow Foods marketing director David Wilson has been promoted to US general manager and global brands director to oversee the venture. He says there are no plans to sell Quorn or enter a joint venture, but he is working with other food manufacturers on new product development and distribution deals: “We plan to test markets in two or three areas, then roll out regionally. Getting the supply and demand balance right will be critical to our success.”

Marlow is increasing its UK ad budget to £5m – its biggest to date. Rainey Kelly Campbell Roalfe/Y&R has developed a new concept for the brand: Quornville, “where everything is wholesome, natural and good”.

Ironically, targeting Quornville-style communities may be Marlow’s best way to raise US sales. One source says: “The brand’s success or failure may depend on which states are targeted. More sophisticated states, like California and Florida, could be more receptive than, say, Texas.”

It is unclear how Quorn will be marketed in the US. But Marlow may have to cosy up to a major global company to make its raid on US larders a success.