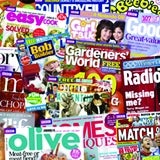 Exponent, which owns Quorn and Gorkana, has now entered exclusive talks with the BBC to buy its magazine portfolio, which includes Radio Times, Top Gear and Good Food.

Analysts estimate the value of a 50% stake in the business to be between £80m and £90m.

BBC Worldwide says in a statement that discussions will continue with Exponent, with a view to completing an agreement in the summer.

The BBC Magazines division has been searching for a commercial partner to buy, licence or take a majority stake in its business since September.

BBC Worldwide had previously said its magazines were restricted by constraints to its editorial remit and borrowing capabilities and that it had other strategic priorities.

Publishers including Bauer Media, Hubert Burda and Future Publishing were all speculated to be involved in the deal.

Other properties owned by Exponent include consumer publishing group Magicalia, TheTrainLine.com and Radley.