Ofgem says that a number of factors including the global recession, environmental targets, ageing power stations and increasing dependency on importing gas have combined to cast “reasonable doubt” over whether current energy arrangements can deliver secure energy supply.

The regulator says, “there is an increasing consensus that leaving the present system of market arrangements and other incentives unchanged is not an option” and unless prompt action is taken by the industry, consumers could face power shortages and higher prices.

In the Project Discovery report, Ofgem has put forward five proposals to secure Britain’s energy supplies and says it is looking to develop a “coherent package” to reform the energy market rather than implementing change in a “piecemeal fashion”.

The proposals range from targeted reforms to promote low carbon energy and setting a minimum price on carbon emissions, to the most radical proposal that would see a centralised market with all future energy investments made through a single entity.

The reforms call for £200bn investment.

Ofgem’s chief executive, Alistair Buchanan, says: “Our evidence shows that Britain has a window of opportunity to put in place far reaching reforms to meet the potential security of supply challenges we may face beyond the middle of this decade. We do not advocate change lightly, but all the facts point to the need for reforms now to provide resilient supply security. Acting earlier will also help keep costs as low as possible for consumers and business.”

John Cridland, CBI deputy director-general, says: “This report serves as a stark warning that existing policy will not deliver… Britain needs new nuclear plants, clean coal, gas generation, wind and other renewable sources to be developed quickly, as well as more gas storage facilities. Having a balanced range of energy sources will help avoid over-reliance on too few sources, and help ensure that energy prices are affordable for consumers and businesses alike.”

“Achieving all of this is going to require massive private-sector investment. In light of this, future policy must take into account the benefits of a competitive market and also the need to give some certainty to investors who will be required to pay for new energy sources.” 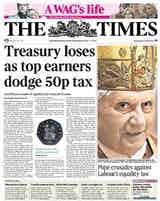 News International has appointed Paul Gilshan to the new role of head of marketing for The Times.

A roundup of retail stories from the past week… John Lewis, Asda, DFS, Morrisons, Amazon, Wal-Mart