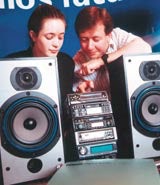 Despite the popularity of digital television during the past few years, the radio equivalent has got off to a stumbling start, replicating many of the errors which dogged previous technology and media launches. Hardware supply fell short of demand, programming has not caught the imaginations of listeners, and potential advertisers remain to be convinced.

However, there are signs of an upturn in fortune. The industry hopes that a new generation of Digital Audio Broadcasting (DAB) portable radios coming on to the market this summer, offering new functions such as rewind and record, combined with Ford’s decision in March to offer a DAB digital radio in all its UK car models, will excite potential purchasers.

Meanwhile, the announcement of Rajar figures for digital station Oneword and EMAP brands Kerrang!, Smash Hits! and Kiss on May 8 should encourage media buyers and clients to look closely at the medium.

The measurement of digital radio listeners, no matter what platform they are using, is expected to increase the overall total of analogue and digital radio listeners substantially. This is illustrated by Jazz FM when it reported its first Rajar digital listening figures in January. It showed that during the last quarter of 2002, the station gained 300,000 new listeners through digital from outside the reach of its London and North-west stations. This took its listenership figures for the period up to 1.27 million from 978,000. At this stage it is not possible to break the figures down by digital platform, whether TV, radio or the internet, but it proved that the audio digital revolution has quietly started.

EMAP’s decision to have its audience measured shows confidence that the group has something positive to share with the industry. Indeed, this summer EMAP will set up a dedicated sales team for its digital services. EMAP Performance chief executive Tim Schoonmaker says that the three stations involved have excellent cross-platform promotional support and good distribution.

There are 320 digital radio services in the UK. Some are analogue simulcasts, some of the services are local to a specific area, but thanks to digital multiplexes (bundles of channels) they can be picked up outside of their region, and some of them are purely digital services, such as Oneword.

Mandy Green, spokeswoman for the Digital Radio Development Bureau (DRDB), says that the BBC has been very important for the medium. The corporation is running a campaign across TV and radio to support the services that it has launched.

However, commercial radio will also have more opportunities to benefit than it ever had on FM. For this reason MXR, a digital group owned by Chrysalis Radio, Guardian Media Group, Jazz FM, Ford, PSion, Soul Media and Capital Radio Group, runs frequent street campaigns, including a tie-up with retailer Comet to educate the public about DAB, its benefits and its services.

But doubts do remain. MediaVest UK head of radio Mark Helm believes that all radio groups have to put their stations up for Rajar, as there is a need for reliable and continuous data about digital radio. He says: “If they are confident about their products then they should be doing it.”

Helm is also sceptical that the range of new products, including radio alarm clocks and in-car products, from Roberts, Goodmans, Bush and Ministry of Sound, will raise consumer interest. He says that despite being able to offer features revolutionary to radio – such as pause and rewind – they are unlikely to sell well because they are too expensive.

DigitalOne chief executive Quentin Howard points out that there is also a need for creative and innovative programming from all sides of the industry.

The catalyst for successful niche stations may come from further consolidation in the industry, says Paul Brown, chief executive of the Commercial Radio Companies Association, as that kind of attention to content can only come from single ownership.

It’s expected that the forthcoming Rajar figures will show more listening through digital TV, whether through Freeview, Sky Digital or digital cable, and through the Net. According to Rajar data, 16 per cent of adults currently listen via the TV, 12 per cent through the Net and two per cent on mobile phones. These platforms are driving new listening opportunities and changing the traditional peaks of radio listenership. Helm and Schoonmaker both believe people no longer care about how they are accessing services, as long as they can.

As DRDB chief executive Ian Dickens points out, digital radio is rejuvenating audio across the entire chain, from manufacturers and retailers to broadcasters and consumers. He believes the roll out of DAB is progressing well, but advertisers will not take it seriously until the number of sets sold reaches the critical mass of 1 million, and the most optimistic estimates for this are by the end of next year.